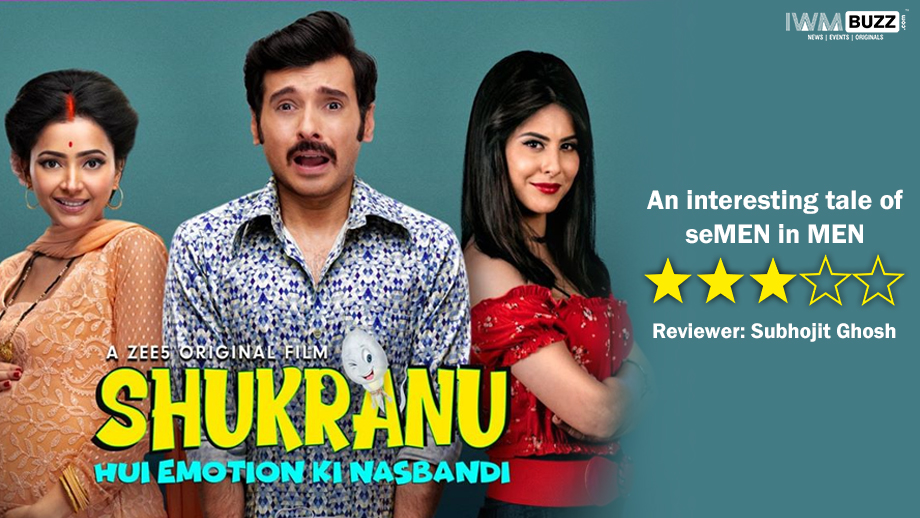 Imagine that you are a man and just two days prior to your big-fat Indian wedding, the surgical process of a vasectomy or in other words, a man’s worst-ever nightmare has been carried on you. How does it feel? This is one situation no man would like to even remotely empathize with. On the other hand, the counter imagination to this would be you as a woman all set for your wedding night romance but eventually find out that your husband has been sterilized and that shatters your dreams of having a baby there itself? Both are very avoidable and scary imaginations, right?

Well, Director Bishnu Dev Halder in his latest ZEE5 release ‘Shukranu’ aka ‘sperm/semen’ just made this imagination turn into a haunting reality. When you hear the word ‘semen/sperm’ and associate comedy with it, you might think that it goes in the same line as an Ayushmann Khurrana starrer ‘Vicky Donor’. But that’s not the case with Shukranu.

It has a different narrative altogether and it makes you enjoy a situation which you will never think could possibly be funny in reality. I mean, sterilization in reality that takes away the right of fatherhood from a man? Horrifying. But Shukranu makes you feel entertained even when you watch this petrifying scene and it’s from a creative point of view, it’s certainly not easy.

Set during the period of the Indian Emergency, we all remember how young blokes of that time would be forcibly sterilized in order to curb down the population level.

Inder, a working middle-class guy living in a town near the capital city of Delhi goes through the same thing. He has had his marriage fixed by his family and just two days prior to him tying the knot with his to-be-wife Reema, he is seized and gets forcibly sterilized by a team of doctors and police officials. Although absolutely nothing remotely close to enjoyable, the sequence has been shown in a very light-hearted manner which is certain to entertain you when you are watching it.

But the plot twist happens soon thereafter when Inder gets the shock of his life after receiving a letter in Delhi that Reema is pregnant. Knowing about his own inability to make Reema pregnant, Inder is convinced and unhesitating about the fact the baby is not his and Reema is having an affair. Now after this development, you might be thinking that the next part would revolve around a spree of comic sequences between Inder and Reema in them trying to convince each other about their stance.

But alas, that’s not the case. The writing team fails to a slight extent in this regard when it comes to playing the curiosity game. As a viewer, you might get a feeling that they were trying to fit in too much for too little a time. Soon what follows is the incoming of the third pivotal character Aakriti. Aakriti happens to be Inder’s neighbor next door with whom he eventually falls in love. Although the entire unfolding happens in a chucklesome note, there’s a little lack in clarity in the plot development. Like for example, neither was the arranged marriage and how and when it happened shown properly nor the emergence of Aakriti’s character. This was one area that had a lot of potential but the writers could only partially do justice to the potential. But the best part is the actors with their performances and expressions beautifully balance it up and save the content from looking dull and boring.

Overall, it’s a nice and entertaining watch which had its moments, ample enough to leave you in splits more often than not. But we feel a lot more effort could have been put when it comes to establishing the characters in a fitting and apt way.

Here’s ending the review with a positive and hopeful note that creative teams continue to get it right when slapstick elements and plots around ‘semen’ and ‘sexual life problems’ are dealt with. Certainly, it will not guarantee the content as a box-office or critical ‘smash’ but an overall balanced product like ‘Shukranu’ will certainly be received well by the audience. Worthy of your 1.45 hours. Go, watch it.