As we bid adieu to the year 2019, here is IWMBuzz.com listing the top internet sensation of the year. Read here for more details. 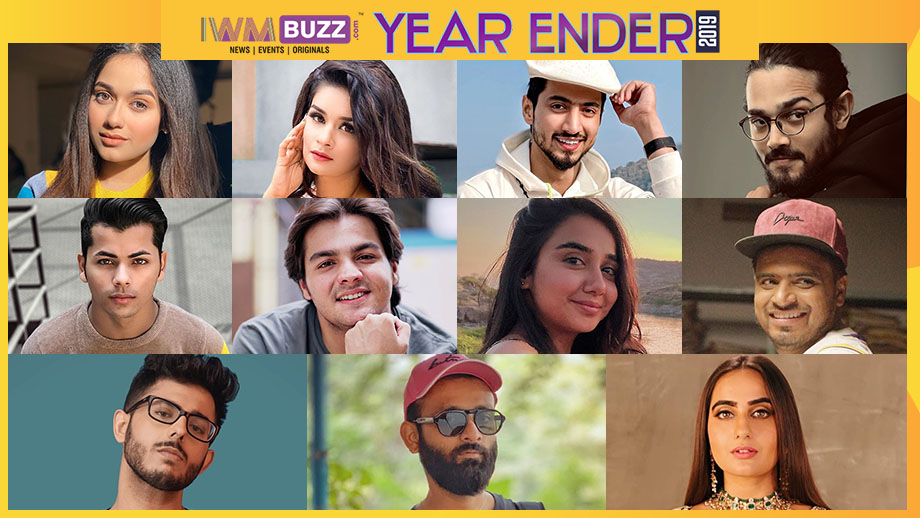 Internet and Social Media are so popular and easy to use that anyone can become a part of them and gain popularity. As we step into a new year, we take a look at the time gone by. 2019 saw some great talents on the internet. These faces have entertained us throughout the year.

We bring you Top Internet Sensations who rose to fame by entertaining viewers with their top-notch flawless performances.

Jannat Zubair: Jannat Zubair is an emerging TikTok star as well as a television actor. She keeps entertaining her fans with her TikTok videos and acting skills. The actor often gives a major style statement with her stylish looks that makes fans go crazy. She is one of the most influential celebrities on the digital platform. Jannat is also quite active on her social media and often is seen sharing a glimpse of her personal and professional life.

Avneet Kaur: Popular TV actress Avneet Kaur gained more popularity via her TikTok videos. Avneet got praised and loved from the time she was first seen on the telly, and has won herself a vast fan base. But now she is loved even more because of her take on the app. Now she not only has a fan base across the nation, but also across the world.

Faisu: Fasial Shaikh, aka Faisu, is the most followed Indian on TikTok. He has gathered an audience of a whopping 21 million followers. The staggering number of followers has made him one of the biggest names on Indian social media. Faisu has also made it to an elite list of top 10 influencers in India. Just like most influencers, Faisu too has been extremely popular among teenagers, especially teenage girls.

Bhuvan Bam: BB Ki Vines is a YouTube channel by Bhuvan Bam, whose 2–8 minute long videos depict the life of an urban teenager and his whimsical conversations with his friends and family. There are a lot of characters in these videos, all played by Bhuvan himself. Bhuvan walked away with the award for Global Entertainer of the Year 2019. From just 10 to 15 views on his first video, to more than a couple of million views, Bhuvan Bam’s BB ki Vines has grown massively.

Siddharth Nigam: Siddharth Nigam has carved a niche for himself by doing some great shows. He is currently seen in Aladdin. Apart from being a talented actor, he is also a social media influencer. He also gives major fitness goals. Siddharth is very active on TikTok and is extremely popular there too.

Prajakta Koli: Prajakta Koli, also known as MostlySane, started with her YouTube journey in 2015. She currently has 4M subscribers in just 4 years, and 570 videos on her YouTube channel. Prajakta also has over 350 fan pages dedicated to her online. Prajakta is one of those creators who aren’t scared to admit to the fact that there will be someone better someday and that their videos may not gather the same response as they do now. But this doesn’t stop her from delivering her best. She is the perfect blend of humility and success.

Amit Bhadana: The 23-year-old YouTube sensation Amit Bhadana is a known figure in the internet world. He started his career at a young age and has around 16.6 million subscribers at present. The YouTuber has won quite a few rewards for his work. What is unique about Amit’s content is that he creates videos in the colloquial Gujari language, rather than the more conventional Hindi or English. He has a huge fan following on the northern side of the country.

CarryMinati: CarryMinati is known for his funny and sometimes quirky videos on YouTube. He has over 9.31 million subscribers. Carry started making video when he was just 11. Gradually, he started improvising on the quality of his content and that was his salvo in the direction of achieving one milestone after the other. Today, he is one of the biggest YouTubers in the country.

Be YouNick: Nikunj Lotia is a sketch comedian, popular with his YouTube channel called Be YouNick. He became famous for his videos, We All Have That One Friend, The Job Interview and The Mass Bunk. His content is, no doubt, full of comedy. This guy from “Republic of Dombivli” has gained 3.43 million subscribers on YouTube.

Kusha Kapila: Kusha Kapila rose from the writing desk at iDiva to become a talent that is now recognised by her many comic alter egos. Famous for sketches that take digs at the country’s rich, her content is hilarious yet nuanced, and manages to take on challenging conversations about the many issues women face in India.