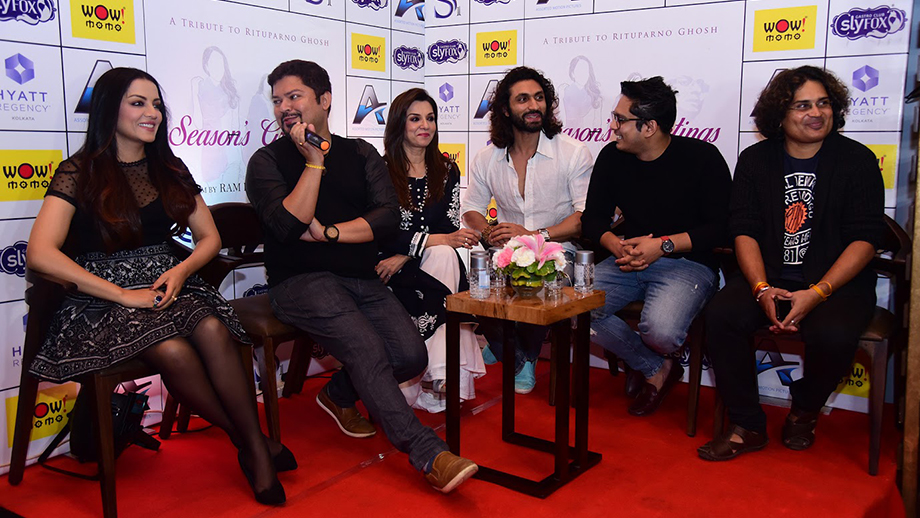 It was a wrap for director Ram Kamal Mukherjee’s A Tribute To Rituparno Ghosh: Seasons Greetings at Slyfox Gastro Pub, Salt Lake City with Celina Jaitly, Lillette Dubey, Azhar Khan, producers Aritra Das and Shailendra Kumar. This film was produced under the banner of Assorted Motion Pictures and SS 1 Entertainment.

While discussing about the film director Ram Kamal Mukherjee shared few insights e.g how he narrated the story to Celina and Lillette in Dubai! Says Ram Kamal,” I guess this is first short film where cast has been finalised not in Bollywood but in Dubai! When I was in Dubai to promote my first short film Cakewalk there I met Lillette ma’am when she was there for her work. First I thought she would say ‘no’ to it but when she heard the script she happily agreed to do the role of a mother. I am really grateful to her for saying yes to the role. In fact I met Celina also in Dubai during the same trip and we bonded over films. That’s when I discussed about the film.”

He added, “Celina and I go a long way. It was really funny that we were chatting up with my project and Cakewalk and I was casually talking about Seasons Greetings and with my utter surprise she expressed her interest to play the role of Romita and yes the rest is history as others say.”

Both Celina and Lillette Dubey has a strong connection with the legend Rituparno Ghosh and this connection came up while both the actors shared few incidents. “In 2012 while I was in Dubai Ritu da called me for a project but that time I was pregnant with twins so I couldn’t do the role but unfortunately we both couldn’t worked together. When Ram was narrating the story to me I said yes as I have always wanted to do a movie which is a meaningful cinema and which has a social cause to it. And being an UN Ambassador for so long and associated with LGBTQIA for almost 18 years I thought I should do this film. In our society this issue is still a taboo but all they say that they need equal right. I am happy to be a part of this project.”

On the other hand Lillette Dubey said, “I have met Rituparno couple of times, he was such a nice human being and very talented director. Though I have not worked with him but I have worked with Aparna Sen, one of his closest associates and a very good friend. I think Ram Kamal is a director who is very sure about his shots. I generally don’t say this, but whenever I like a film or a director, I say that it was like a ‘play’. The last time I gave this compliment to Mira Nair, and now Ram Kamal.”

The film marks debut of Azhar Khan as male lead. “I am eternally grateful to Ram da for this opportunity. I mean what else could one expect as an actor? Before the shoot, he had warned me that I have to be on my toes to face such senior actors like Lillette Ma’aam and Celina Jaitly. But I was completely shocked to see that they were extremely humble and helped me a lot with improvisation in all my scenes,” said Azhar.

Producer Aritra Das said, “I am learning with each of my experience. After Cakewalk now we just finished Season’s Greetings which is a tribute to Rituparno Ghosh. Celina and Lillette Ma’aam are extremely professional, and this wouldn’t have been possible without them.” The film revolves around mother and daughter relationship, and also features two Tagore compositions in Maithili language. The entire cast and crew members completed the shoot till 4 am, and without taking any break they met members of press and interacted with them. “I wanted to share my happiness with my friends and former colleagues from the media fraternity, as they have always stood beside us, and we often forget to thank them,” added Ram Kamal.