Apharan Sabka Katega the hugely successful ALTBalaji series will soon be back with Season 2. Work on the new season has begun!!

The series which has Arunoday Singh and Nidhi Singh in the lead roles came as a thunderbolt and won over the audiences’ minds.

But there is one major development that has happened regarding the new season.

Earlier, the series was co-produced and directed by Siddharth Sengupta. However, the Season 2 will be produced by Tanveer Bookwala’s Ding Entertainment.

As per a reliable source, “The shift in production has happened and work is presently on for the new season.”

The second season will see Arunoday Singh and Nidhi Singh getting back.

As we know, Tanveer Bookwala’s recent web-series Asur for Voot Select has been a huge hit getting raving reviews.

We buzzed Producer Tanveer and the spokesperson at ALTBalaji but did not get revert.

Also read, My standard and confidence in myself has risen with Apharan Sabka Katega: Arunoday Singh 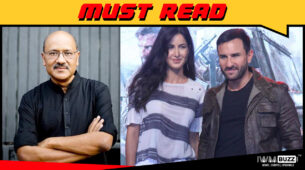 I am an 'aatmanirbhar' pro now - Shivya Pathania