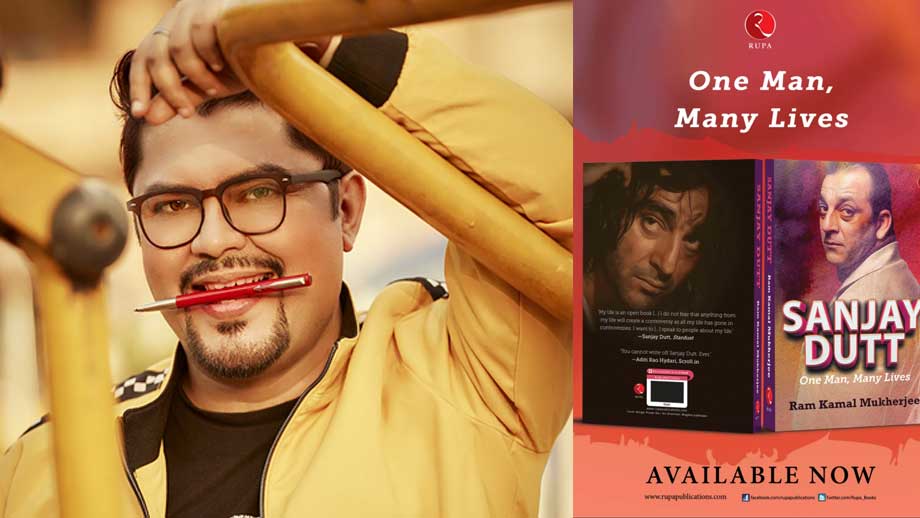 Noted author and filmmaker Ram Kamal Mukherjee announced his latest book Sanjay Dutt – One Man, Many Lives. Published by Rupa Publishing, this book deals with entire journey of Sanjay Dutt and also gives an insight towards his inner world. After writing award-winning biography Beyond the Dreamgirl on Bollywood legend Hema Malini, Ram Kamal picked on Sanjay Dutt as his subject. “This is an unauthorised biography, and I was writing this book immediately after I released my book on Hema Malini,” informs the author. This hardcover edition is an analytical book on the journey of India’s first star kid who lived his life like a true rockstar. “I have met Sanju occasionally as a journalist at various events, and to be honest I don’t have any personal connection with him. But what intrigued me the most about him is that he was probably the most misunderstood star from our generation. I worked for almost two years on this. During my research I realized that behind the tough biceps and deadly eyes hides a childlike soul, this book tries to tell that story,” he added.

After writing successful books like Diva Unveiled, Long Island Iced Tea, Beyond the Dreamgirl and Fitness Secrets of Bollywood Stars, this book has already created ripples in the world of biographies. Since there is already a book on Sanjay Dutt penned by former journalist Yaseer Usmaan, and there is news of Sanjay Dutt writing his own biography, where does this book stand? “This book is more of an analysis, a case study. I am not claiming to be Sanjay Dutt’s biographer, but through his life, I have captured the changing scenario of Bollywood. I have refrained from publishing heresay and gossips, most facts are supported by either his own interviews or facts published by reputed media. We are not trying to judge Sanjay, we are just telling you a story, uncensored,” says Ram Kamal.

The book has some rare images of Sanjay Dutt from the archives of Stardust. Being the former editor of Stardust magazine, his research materials are mostly from the magazine. “I am thankful to Mr. Nari Hira for allowing me to access their 40 years old archive. Without the resource this would be nearly impossible to execute,” says India’s first Power Brand film journalist and biographer.

The 190 page book comprises of 13 elaborate chapters tracing his growth as a human being to an icon for other superstars from Bollywood. “Sanjay is an enigma. While writing this book I went through a seesaw of emotions. I fell in love with Sunil Dutt ji and Nargis ji once agian, how I wish every child had a father and mother like them. I realized the pain that Manyata had to go through behind the sheen and showbiz. I felt his pain and trying to prove his innocence to the world,” says the author. Recently we saw Rajkumar Hirani’s version of Sanju that blamed media for everything that happend in Sanjay Dutt’s life. “I don’t think that it was right to blame media for everything that has happened in his life, but I also agree that media went a bit over the top with Sanjay Dutt and his life. He was a soft target, and needless to say he was a political target too,” says Ram Kamal. So will Sanjay Dutt endorse this book? “Someone who is penning his own book will not endorse another, that’s obvious. But I am sure that if he reads the book he will not be disappointed. The book is vulnerable, just like the subject,” says Ram Kamal.

We can do 'virtual' jhappi to heal the world: Sanjay Dutt