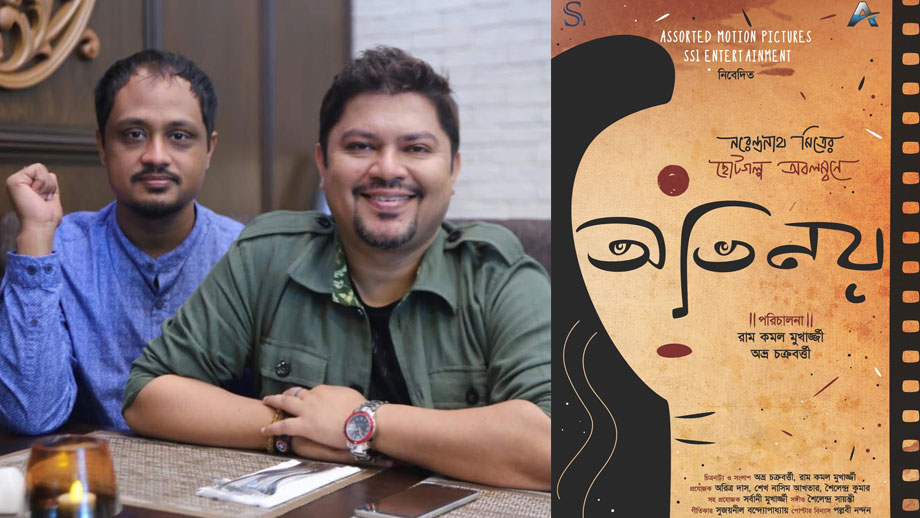 Narendranath Mitra popularly known for his soul stirring short story Mahanagar, adapted by Satyajit Ray and “Ras” adpated on screen for Hindi film Saudagar. While the first marked Jaya Bachchan’s Bengali debut, the second remains one of the most critically acclaimed film of Amitabh Bachchan. Almost after half a century, director Ram Kamal Mukherjee will bring back Mitra’s work on screen with his Bengali directorial debut Abhinoy.

“Narendranath Mitra used to tell contemporary stories. I feel that Bengal is the storehouse of content, and we can never run short of stories,” says director Ram Kamal Mukherjee. The film will be co-directed by Abhra Chakraborty, and will be produced by Aritra Das, Shailendra Kumar and Sheik Nasim Akhtar. “While shooting for Cakewalk in Kolkata, I felt that I should do a Bengali film. Incidentally, my second film Seasons Greetings is also in Hindi. While working on the pre production of Season’s Greetings I came across this collection of short stories. That’s when I decided that I will adapt this story,” says Ram Kamal.

Incidentally he wrote the first draft of the film on a flight and when he landed he shared it with Abhra. “Ram Kamal da, brought in a completely different perspective to this story,” says co director Abhra Chakraborty. “I worked on the screenplay and dialogue, keeping the basic structure of the draft that he had written,” added Abhra. Abhra worked with noted filmmaker Bappaditya Bandhopadhya in Elar Char Adhay.

“Frankly speaking, I will give entire credit to Abhra for writing such a beautiful screenplay. He not only took it to a differnt level, but added such wonderful moments that will stay with you forever,” says Ram Kamal. The film deals with ordeals of journalists, actors and people who lives in this city with dreams in their eyes. “I am born and educated in Kolkata, no one knows the city better than me. Same goes with Abhra, who lived in this city since birth. We will try and bring in various aspects of Kolkata in Abhinoy,” says Ram Kamal.

The lyrics of the film has been written by noted television anchor and writer Sujoyneel Bandhopadhya. “He is my Facebook friend. One day while scrolling through my timeline I noticed Sujoyneel’s status, which read like a poem, that’s when I requested if he could write a song for my film,” says Ram Kamal.

Produced under the banner of Assorted Motion Pictures and SS1 Entertainments, the film will have three male protagonists, played bt established actors from Bengali film industry. The female lead will be a fresh face. “There is a reason why we don’t want to cast anyone known for the female lead. The character needs to be real, almost like someone you would connect immediately,” says Abhra.

The poster of the film has been designed by artist Pallabi Nandan and speaks volume about her artistic interpretation of the story through alphabets. The creative has fetched good response on social media. “I am glad that we are working with fresh talents from Bengal, and when I heard the story of Abhinoy, I knew that this film will instantly strike a chord with Bengali audience,” says producer Aritra Das from Assorted Motion Pictures.

Incidentally, Satyajit Ray had made a short film on the same story with Smita Patil for Doordarshan, and years later his son Sandip Ray did a Bengali version with Sreelekha Mitra and Kaushik Sen. “With due regards to both the makers, our narrative is completely different from their narrative,” says Ram Kamal. Music will be composed by Shailendra Sayanti and the entire movie will be shot in North Kolkata bylanes.

Take tips from Faisu and become one, like him

Bhuvan Bam and his life’s achievements to inspire you