If sources are to be believed, Ekta Kapoor wants few major portions of Ragini MMS Season 2 to be reshot. Read here for details… Ekta Kapoor has a tough battle ahead of her. While the timeline of the next season of Ragini MMS Returns 2 gets stiffer, the trailer will go live on 12th of December, while the series will upload on the 18th on ALTBalaji and ZEE5.

If sources are to be believed, Ekta was unhappy with some portions of the shot material and has apparently ordered a major reshoot.

A couple of new directors have also been roped in. “This is putting a lot of strain on the team; they are racing against the clock, as a reshoot also means the final cut will only be out very close to the release day,” added our informed source.

Another source added that something similar had happened with Ekta’s other recent web series Fittrat as well.

Lead actor Varun Sood, on his part, says, “There is no such rush as we are just doing our patchwork as our dates were not available. The product has come out well, do watch out for it.”

However, our source adds that it is not just patchwork (left over stuff), but important sequences which have to be re-done.

This steamy horrex (horror and sex) also stars Divya Agarwal and Sunny Leone in a special appearance. The former American adult star was part of the Ragini MMS 2 movie as well.

We tried to get in touch with Divya and Ekta, but could not get through to them till the time of filing of the story. 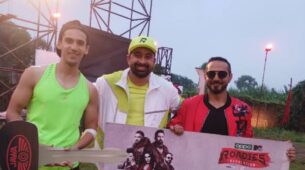 Roadies Revolution Written Update S18 Ep36 16th January 2021: The Grand-Finale, who will be the ultimate Roadie?