Sachin Shroff who has had a good TV and ad career will play an important role in the upcoming MX Player series. Bobby Deol has been surging ahead with his hit movies on the big screen!!

And it is the same on the digital platform, as the popular actor after shooting for his debut web venture in Class of 83, has bagged yet another meaty title role in the upcoming MX Player series.

Reports are out of Bobby Deol playing the title role in the political satire based on the Godman Gurmeet Ram Rahim Singh who is presently serving life imprisonment for rape and murder. The series will be the directorial debut of Prakash Jha.

News coming now is that talented actor Sachin Shroff who has recently bagged many wonderfully crafted ad films, will play one of the prominent characters in the series.

Sachin Shroff who has stunningly good looks has worked in more than 650 ad films. He has had a good TV career as well.

This will be his debut into the web ecosystem.

As per a reliable source, “Sachin will play a very important role in the series.”

We buzzed Sachin Shroff but did not get revert.

We reached out to Director Prakash Jha and the spokesperson at MX Player, but did not get revert. 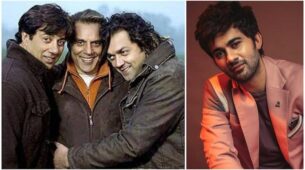