The Vishnu Hindu Parishad (VHP) has threatened to launch an all-India agitation against Netflix for alleged anti-Hindu activities. Giving the example Netflix’s Leila, Ghoul, Chippa, Sacred Games and Krishna & His Leela, a letter from the VHP accuses Netflix of targeting and tarnishing Hinduism.

After the premiere of the feature film Chippa where a Muslim character was repeatedly heard referring to Lord Hanuman as a ‘bandar’(monkey) another film this time the Telugu film Krishna & His Leela about a guy named Krishna(Siddhu Jonnalagada) being portrayed as a modern-day Krishna with many love/lust interests.

The allusion to mythology has not gone down well with a section of the audience who are calling the film out for its anti-Hindu content. We now hear from reliable sources that Netflix has decided to appoint an elaborate filtering process to avoid any such unsavory allegation and controversies in the future.

A source close to the development informs, “Netflix believes in full freedom of expression. But a lot of people have begun to feel that this freedom is being misused on the OTT platform. Netflix wants to ensure this doesn’t happen in the future.” 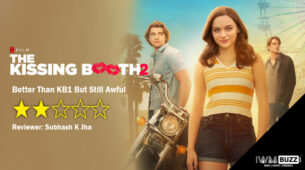