Casino to beam soon, if sources are to believed... Although coronavirus has shut down the entertainment industry, OTT players continue to stream fresh content.

State of Siege (Zee5), Special Ops (Disney Hotstar) and others have been uploaded during the on-going lockdown which might now be extended beyond the earlier 15th April date.

In this scenario there is a buzz that upcoming Zee5 thriller Casino starring Karanvir Bohra (KV), Mandana Karimi, Aindrita Ray, Pooja Banerjee and Sudhanshu Pande might hit the WWW towards the month-end.

This brother-sister clash over control of a gambling business supposed to stream on 10th April but that date has been pushed back.

KV who also produces the show confirmed the same saying, “We have wrapped up the shoot and hope to go live by month-end.” He does not think lack of on-ground promotion will affect its chances. “Most people are at home anyway.”

Pooja Banerjee was unsure of the same wondering whether the edit work will be completed in time given the lockdown, “We had just finished shoot two days before the lockdown kicked in.”

Our attempt to reach Zee5 spokesperson came to naught. 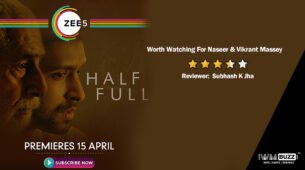