Pinaka Studios Pvt Ltd owner Shashank Rai, producer of MX Player’s next Raktanchal, is glad that his work was appreciated by the audiences and critics.

He says, “The journey of the show was really tough. It took me a year to write this series and later the other procedure happened. I would like to thank MX Player as they supported us a lot. We were making the show on the gangsters who are still alive, so it was difficult. Our main concern was the reaction of these people. Tapping Purvanchal, the place, was the main reason behind making Raktanchal. We were shooting at real locations and that was also a task. However, we never wanted to compromise with the quality hence we continued with real locations. I was always worried during the shoot of the show. We did face few calls from the real gangsters on whom the story was written and we explained to them that the story is a mixture of fiction and reality. At the end of the day, they too liked our show and I was happy about it.”

He adds, “We are happy that audiences liked our show and we are enjoying the success. The show has taught us a lot. Although we had fear, we were ready to take the challenge and we always knew that the show would be successful and hence we took all the difficulties and challenges.”

Talking about the filming of the series, he adds, “It was difficult because we were shooting in extreme cold. We started in December and completed the shoot by February. Few days the temperature would be 1 degree and some days 2 degrees. It was a task to shoot in the cold weather. The cast and crew supported me a lot and I thank them for everything. The credit goes to everyone, the cast, crew, and director. It was a tough journey but as they say ‘things which are tough in the process get great results’, I guess we got that at the end.”

Shashank confirmed season 2 of the series. Commenting on the same, he shares, “We are writing season 2 and it will be bigger and better compared to season 1. I am sure people have high expectations when it comes to season 2. Now, our challenge is to make season 2 bigger. I cannot reveal a lot at this point of time but I am sure audiences will love season 2.”

Also Read: It was challenging to portray Vijay Singh in Raktanchal as it was unlike me: Kranti Prakash Jha 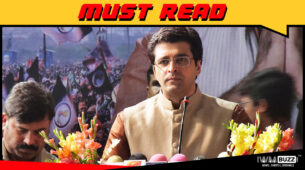