ALTBalaji recently launched its most ambitious and the biggest show of this year, BOSE: Dead/Alive on 20th Nov. 2017.  This thrilling 9-part show starring Rajkummar Rao, unfolds the mystery behind Netaji’s death and talks about India’s biggest cover-up, was extensively researched for about 18 months including Anuj Dhar’s book. It’s only show out of India thus far that have been shot across locations like Poland, Thailand, Ladakh, Kolkata and Mumbai. The challenge was to launch this show in India and globally in absence of big budget and any such birth & privilege advantages. 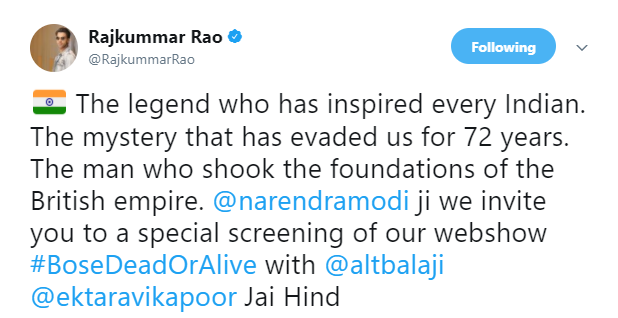 That’s when ALTBalaji’s marketing team decided to use digital as primary vehicle to launch BOSE: Dead/Alive. 70% of total launch budget, less than 5 Cr, was invested in digital and rest in traditional media. Multiple versions of creative assets were built to reach different audiences within the core TG. Apart from English, Hindi and Bengali contextual ads were also created to build awareness and acquire paid subscribers. This is also the only show where none of the episodes were released on YouTube. Social media and innovative PR strategies were also deployed to accentuate digital launch and create awareness of the show. Once the show went live on ALTBalaji platform on November 20th, it turned out to be the most critically acclaimed and loved show that India had ever seen thus far. ALTBalaji team received accolades from known and unknown.

Speaking about the marketing strategy for BOSE: Dead/Alive, Manav Sethi, CMO, ALTBalaji said, “Its a bigger challenge when you are 8 months into launching the platform itself and you have to launch the biggest show this county has ever seen! We have been very focused on digital platforms as primary vehicle for growth- both for views and paid subscribers. We never had advantage of birth or privilege which our competition enjoys. No big budgets, yet we made BOSE: Dead/Alive big! We didn’t have the luxury of doing big outdoor or print jackets as we couldn’t afford those. We didn’t have any network traffic- online/offline. We carved out multiple affinity containers across various digital properties including Google and Facebook. While we optimized the plan for reach and frequency, we also created multiple creatives and trailers for these affinity segments. We leveraged social and influencers to create the pre-launch and launch buzz around the show. Within 10 days of it going live we received 5M views on the show and it’s possibly the most binge watched show India has ever seen, as our analytics shows that most of these have watched all 9 episodes back-to-back. Delhi, Mumbai, Kolkata & Uttar Pradesh have been contributed most views from India.”

Places To Visit During Various Festivals

I was extremely excited when I heard Roohi will have a theatrical rele...