Check out the funny videos of Harsh Beniwal. The proficient Harsh Beniwal is an inhabitant of Delhi, who has marked his YouTube career in recent years. Harsh has keen interests towards theatre and has participated in various plays at an early age of life.

Harsh started making and uploading videos through the platform of Instagram first in the year 2013.

He uploaded his first Vine video on his self titled YouTube channel in the year 2015. His videos are based upon his own life, which he uploads in short clips, and in a humorous and unique manner. His number of views and subscribers started growing tremendously as soon as he posted her first vine video.

He also created a YouTube channel based on comedy and prank videos, which is titled as ‘Hasley India’, in September 2015.

Harsh Beniwal is quite popular not only on YouTube but also on Instagram and Twitter. He gained millions of subscribers and followers on each platform of social media.

Check out his latest funny videos which will make you roll laughing. CarryMinati Vs Beer Biceps Vs Be Younick: Who deserves more views on Youtube? 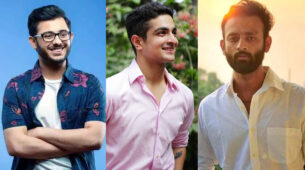 Must Watch! CarryMinati, Beer Biceps, Be Younick: Most-Viewed Youtube Videos of All Time