Anveshi Jain, the most googled actress, is one of the hottest beauties on the digital platform.

The young and talented beauty rose to fame after featuring in ALTBalaji’s ‘Gandii Baat 2’.

Anveshi has more than 2.5 million followers on her official Instagram account and she is also a social media sensation.

The diva was born on 25 June 1991. Anveshi is from Khajuraho, Bundelkhand, Madhya Pradesh, India. The small-town girl has a degree of Bachelor in Electrical and Electronic Engineering. Her journey from a small-town girl to a big star has been very inspirational.

Before entering and entertaining the Bollywood industry, she has been a good and demanding host of many functions and shows. She has hosted Make in India, and IFA Berlin events.

Anveshi has featured in the Gujarati cinema as well. In fact, her debut film was a Gujarati film named G where she played the character of Vidhya. The actress gained immense love for her acting talent and via her hard work she has made big in no time.

Also Read: Why Is Anveshi Jain So Beautiful?

Anveshi is a popular creator and has an app by her name. She usually gives relationship tips. The actress is a recipient of Dadasaheb Phalke Icon Award 2019, held in Mumbai, in two categories – Social Influencer of The Year and Persona of the year 2019.

HOT and SEXY Photos Of Anveshi Jain Will Make You Sweat! Why is Disha Patani loving Tiger Shroff so much? 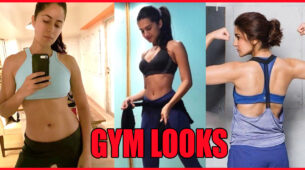