Yami Gautam In Solid Colour Vs Striped Pantsuit? Which Look Is Your Fav? | IWMBuzz
Lifestyle | Fashion

Take a look at Yami Gautam’s pantsuit looks which are always on point!

Yami Gautam is a Bollywood actress who has impressed us with her movies. The actress has appeared in movies like ‘Kaabil’, ‘Sanam Re, ‘Ginny Weds Sunny’, ‘Uri: The Surgical Strike’ and a few more. The actress has also been a part of several Telugu, Kannada as well as Malayalam films. Today we look at the pantsuit looks of the actress. Yami Gautam has been sported wearing several styles and patterns of pantsuit giving us the major power vibes. For instance, the actress donned a red and white striped pantsuit that consisted of a blazer coat and matching flared pants teamed up with white heels to accentuate her power looks. The actress seems to be in love with pantsuits as she was yet again seen in another stunning white and black striped suit. The actress’s black and white suit looks consisted of a sleeveless blazer coat that was belted with the belt of the same fabric paired along with matching wide-legged black and white striped pants. Not just in different colored stripes, but Yami has also aced the poweR look in plain solid colors as well.

Yami Gautam made a powerful statement rocking the solid ice blue pantsuit that featured an off-shouldered formal jacket teamed up with matching ice blue flared formal pants. Yami looked fierce and elegant in this outfit as she proved her strong pantsuit game to be on fleek. Yami ditched the mainstream gown looks of the Award function, and instead opted for a fiery red pantsuit along with a red mesh top for her appearance at the Vogue Beauty Awards.

On the professional front, Yami will be next seen in the movie ‘Bhoot Police’ which will also star actors like Saif Ali Khan, Jackqueline Fernandez, Arjun Kapoor, and a few other prominent actors as well. Take a look at Yami Gautam’s pantsuit looks which are always on point! 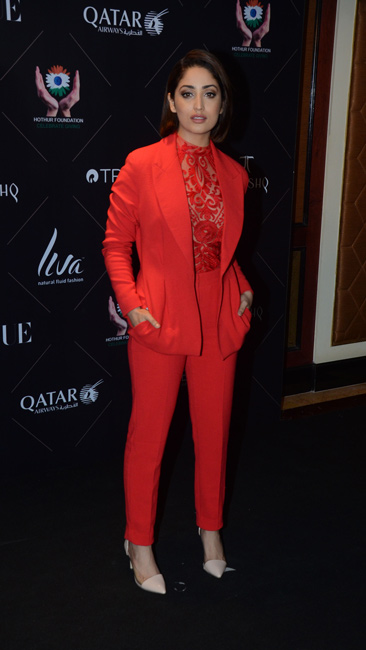 Have You Seen This Funny Dance Video Of Yami Gautam With Vikrant Massey? Go Have A Look