From Arjun Rampal To Arjun Kapoor: Top 5 Most Stylish Looks Of Bollywood Actors On Red Carpet Of All Times | IWMBuzz
Movies | Celebrities Stars attend award function in their best outfit, or their quirkiest one… depending on the actor. Over the year there have been some amazing looks that were shown off at these award ceremonies. There are only so many that stick with you for a long time.

Arjun Rampal, the actor who started his journey to stardom with modelling has a great taste in fashion and has attended various awards ceremonies in only the best! He attended the MTV – IWMBuzz Digital Awards 2019 with his wife dressed in a striking semi-formal look! He wore a three-piece grey suit with a blazer, vest, and trousers. However, he styled the look with a plain white long-sleeved shirt and a pair of white sporty shoes. It was an amazing look on him!

Ranveer Sing has a bizarre sense of fashion that only he can carry off, and carry off well at that! Ranveer has worn many eye-catching ensembles to awards ceremonies before. But his vibrant look at the Filmfare awards of 2018, he walked the red carpet in the spunkiest of suits. He wore a Karrtik D suit with a print of film posters all over it! He paired the look with Louboutins.

Kartik Aryan has styled himself in some amazing looks and is known for his sense of style. For the 2020 Filmfare Awards, he came styled in a Dior suit. It was a grey satin shirt styled with a grey blazer and trousers. He finished the look with a pair of sneakers. His funky footwear gave the cool look of the oomph quotient.

Ayushman Khurana attended the Star Screen Awards 2019 in a magnificent suit and bow tie. He wowed everyone with the silver blazer he wore to the award ceremony.

Arjun Kapoor attended the Grazia Young Fashion Awards 2016 in a fresh and quirky look! While he has definitely rocked the formal suit look, this look was just as stunning! His ensemble was a mixture of ethnic with a splash of western suave. His look was styled with a dhoti kurta look, no prints! It was styled with a pair of grey sneakers.

Check out their Red Carpet looks here. And let us know what you think of them! 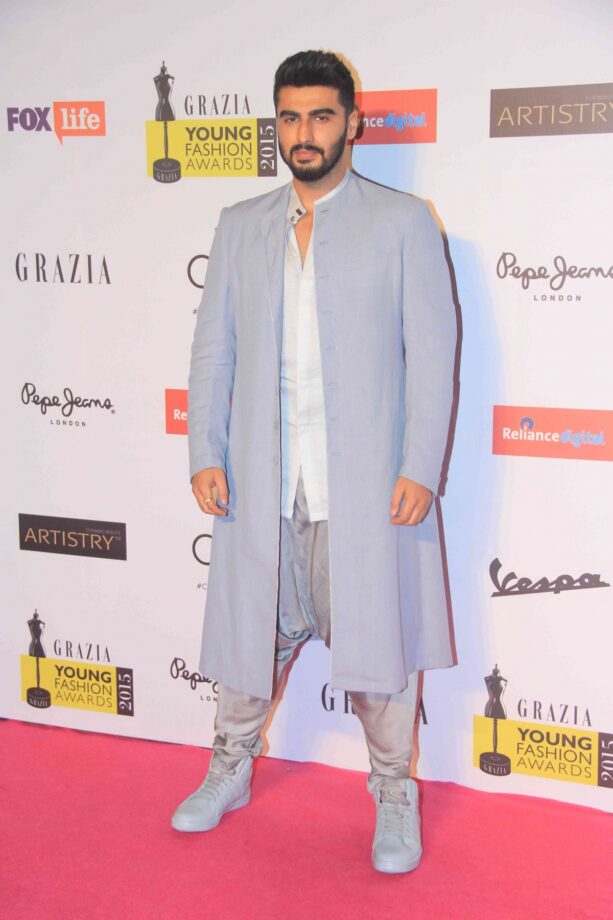