IWMBuzz tells you what Alaya F has to say on criticism Alaya F is an actress who has dazzled the film industry and its audience with her performance in her debut movie ‘Jaawani Jaaneman’.

The actress had a compelling aura about herself in the movie and she performed an unconventional role marvelously even though it was her first performance in a movie.

In a recent live session on social media, Alaya spoke about how she takes criticism and praises and gets motivated by it. The actress said, “I get motivated by criticism and by praise the main thing is to learn from it and not let it let you down and that’s what I aspire to do”

The actress knows that it is important for an actor to sharpen their skills with criticism and praises as it gives one an idea of where they stand and how their skills can be enhanced.

Alaya is keeping herself occupied while on lockdown. The actress is doodling, working out, reading, watching movies, and much more. Alaya is just ensuring to make the maximum use of her time and grow during this period of creative fertility. She has even been very active on her social media and is sharing her candid videos which everyone is totally enjoying.

The actress hit a treble of debuts earlier this year as she featured on the cover of a leading magazine and even walked at the fashion week for a major clothing brand soon after her film was released. 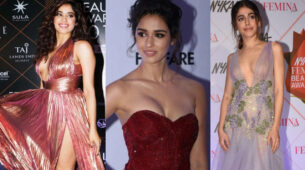 Tara Sutaria Vs Alaya F: The Bombshell With Prettiest Smile?