Although Gulzar wrote some really sensitive dialogues and songs for Rajesh Khanna in the classic Anand, the director never directed the superstar, although he came this close to doing so.

So what happened? The story goes that Gulzar Saab had a perfect script that resonated well with Rajesh Khanna’s romantic image. So he called up the star’s secretary and asked for an appointment. The not-impolite secretary asked Gulzar Saab to drop by at Khanna’s iconic Aashirwaad bungalow which was a bigger tourist attraction in the early 1970s that the Bachchans’ residence Jalsa.

Gulzar Saab was told he could come “anytime” after 10 pm, as “Saab meets producers only after dinner.”

By the time Gulzar Saab reached Aashirwaad, drinks were flowing, spirits were high and Khanna’s famous all-night durbar(royal attendance) was fully on.

Gulzar Saab refused to join in the raucous merrymaking he could hear inside. He waited in the outer room politely and patiently for the Man of the house to emerge. Hours ticked away. Finally, Gulzar Saab called the Secretary wondering what happened. The Secretary advised him to go right in as it is unlikely that God will walk out of darshan-venue to meet a visitor.

Sighing in disbelief, Gulzar Saab went right in. What he saw blew his mind. Khanna was surrounded by some of the top directors, musicians, actors and actresses of the time. They were all laughing loudly at his jokes, glasses were being filled by a number of bearers. It was a night of pleasure with no seeming closure. It resembled a scene from a posh bar rather than the home of an eminent superstar.

Since it was impossible for Gulzar Saab to have a conversation with the all-powerful Khanna let alone narrate a script, he did the next thing.

Gulzar Saab fled the scene and never returned. That’s how Rajesh Khanna lost the chance to work in the Gulzar classics. Amitabh Bachchan too never worked with Gulzar Saab. The two were supposed to do Mausam together and Jaya Bachchan, nee Bhaduri was to play the female lead. Ultimately Mausam was made with Sanjeev Kumar and Sharmila Tagore. When Both Rajesh Khanna & Amitabh Bachchan Wanted To Die 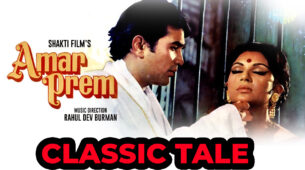 Catching Up With A Classic: Amar Prem