From its opening montage of a young rustic girl watching her callous husband bring home another wife, to the dying moments when the woman, now in her twilight years, is taken away to the relative comfort of her foster-son’s home as the festivities of Durga Puja break out on the streets of Kolkata… Amar Prem is a glorious homage to that favourite Bollywood archetype: the golden-hearted prostitute.

That Sharmila Tagore plays the woman whom men of all ages gravitate to in pursuit of some heavy-duty nurturing is a very happy situation for the screenplay. In the film a 7-year old boy and a 30-plus man both desire the same kind of emotional attention from her. This prostitute is not about sex. She is about the soul. Sharmila brings to this timeless adaptation of Bibhutibushan Bandhopaddhyay’s the story, a kind of simpering beauty that levitates the lyricism of the tragic but uplifting tale to the level of a supremely seductive saga.

Sharmila’s character, a homeless childless woman who is tricked into a life of prostitution is not just a mother-figure to the lonely neglected near-divorcee Anand Babu (Rajesh Khanna), she is also the woman to the ill-treated neighbourhood Nandu (Master Bobby who played pivotal roles in a number of films including Ek Phool Do Mali and Amar Prem before disappearing into adulthood) keeps running to for solace and samosas, in spite of being severely punished by his stepmother (Bindu).

In one of the many sequences simmering with seductive synergy Sharmila wonders aloud why Anand Babu insists on coming to her when he has a home and wife.

“Even Nandu has a home and a family. Why does he come to you?” counters Rajesh Khanna, thereby raising an important issue. Indian men of all ages look for their mother in every woman they love. In Amar Prem the Oedipal complex is turned on its head…away from the bed. The men in Pushpa’s life want to be mollycoddled. Though she’s a prostitute she is never shown giving sex. Men want something far more basic from her. Pushpa is the Devi Maa reincarnated. So giving, the men forget she’s human after all.

Pushpa’s relationship with Anand Babu is purely platonic. She serves him drinks, provides him a much-needed shoulder to cry on. She is attentive and compassionate but never over-inquisitive. There is only one sequence where she actually asks him about his wife. And even there Anand Babu doesn’t tell her the truth about his marital life.

The truth is, his wife has no time for him.

Shakti Samanta was not just a master storyteller, he took grave risks with the draconian star system. At a time when Rajesh Khanna after the dream launch in Shakti’s Aradhana two years earlier was the movie monarch the director cast Khanna as the third lead of Amar Prem. The film’s main dramatic and emotional resonance emanates from Pushpa’s unconditional love for the boy Nandu. Anand Babu comes later.

Sportingly Rajesh Khanna creates a beautiful space for his character. The mutating paradigms of life that know no succour at home spills persuasively out of Khanna’s portrayal. He is a man who claims to hate tears and cries in tearless grief for love.

But it’s Sharmila’s stylized but supremely seductive performance that holds the mutating plot together. Her heavy silk sarees, her elaborate hairstyles, the jewellery and quality of innocent coquettishness contribute cogently to making Amar Prem the experience that it is.

There are moments of honey-dipped Pure Cinema carpeting this delicately-threaded tale of a Devi and her two devotees. The sequence shot in the red-light area leading up to Lata Mangeshkar’s timeless and pristine Raina beeti jaye is a classic study of divine seduction. It has its antecedents in the film Adalat which came 18 years earlier. The sequence of Nargis singing Lataji’s Unko yeh shikayat hai in Adalat and Sharmila singing Raina beeti jaye in Amar Prem are formated on the principle of the Divine Woman’s magnetic voice and beauty pulling the tormented man into reading the sleazy ambience of the kotha as a place of worship.

Indeed Amar Prem makes a silently screaming plea in defense of the Fallen Woman. The girls in the brothel mingle and chatter happily as though they’re in a run-down boarding school.

The concept of the anointed whore-goddess has its roots in the way Saratchandra Chatterjee had portrayed Chandramukhi in Devdas. Amar Prem carries the mythical concept forward to a heartbreaking crescendo of deification. No matter where the Fallen Woman, Pushpa is tossed by destiny she manages to raise moral standards around her.

In most evocative section of her journey from ravaged innocence to pained old age, Pushpa ends up as maidservant washing vessels in a rundown lodge (a lot of aged prostitutes find themselves reduced to menial jobs at the end of their lives). In a vivid reversal of fortune, the husband Manmohan) who had once driven Pushpa out of his home now lies on his deathbed in a pokey desolate room. She gives him his last drink of water. Then when he dies, like a true traditional Hindu wife she breaks her bangle with a rock in a symbolical gesture of widowhood.

The above sequence would probably seem laughable in the contemporary socio-cultural context where women scarcely wear glass bangles, let alone break them. But think about it. The woman, the wife, the mother, and the daughter …every role that a girl is expected to play is subsumed in Sharmila Tagore’s commodious persona without commodifying her. She is at the same time, a full-bodied woman and a divine entity, flesh and flash of eternity…She is Every-woman and yet not quite like anyone else. And when Nandu shows up at the end to take her away, we feel the same surge of relief for her that we feel when a comatose relative finally leaves for the other world.

“My two all-time favourite films are Amar Prem and Anand. It’s just a coincidence that one of these happens to be directed by my father. I was 20 years old when my father made Amar Prem. I vividly remember the recordings of all the memorable songs. Pancham(R.D. Burman), Rajesh Khanna and my father were a unbreakable team. Though Amar Prem was a remake of Bengali film(Nishipadma) I feel our version of the story was far superior. Honestly, I didn’t much care for the performance of the actress Sabitri Chatterjee who played Pushpa in the Bengali film. What Sharmila did in Amar Prem was remarkable. She completely re-interpreted the character, whereas Rajesh Khanna was asked to model his performance on Uttam Kumar in Nishipadma, which he did and then added his own personality to it. For its time Amar Prem was a daring experiment. It cast one of the most saleable pairs of the times as a man and tawaif. R.D. Burman’s music added a whole dimension to the drama. Do you know Amar Prem was the only film in which Pancham’s father Sachindev Burman sang his son’s composition? To this day listeners break down when they hear Burman Dada sing Doli mein bithaye ke kahaar.I’ve to tell you something very interesting about the most popular song Chingari koi bhadke in Amar Prem. There was no situation for that song in the screenplay. One day my father and the lyricist Anand Bakshi Saab were sitting together, as they usually did in the evenings, when Bakshi Saab recited Chingari koi bhadke for my father. On hearing the words my father was stunned. ‘I’m using this song in my film,’ he declared. When Bakshi Saab protested that there was no situation for the number in the film my father reassured him, ‘Leave it to me. I’ll find a place for it.’ And he did. There’s a unique quality of romance, drama and music in Amar Prem. The film never aged.”

“I had seen the original Bengali film before doing Amar Prem. Shakti-da had made both me and Kaka (Rajesh Khanna) see it. I quite liked the original film. It was more about the woman and her relationship with the child. I had recently become a mother, so it was relatively easy for me to do the motherly character. And Kaka’s role was to be done by Raj Kumar. But Kaka who had done Aradhana with me and Shakti Samanta, insisted on being a part of the film. Since Uttam Kumar had done such a fabulous job in the original Shakti-da made Kaka model his performance on the original. This was one of those films that just turned out right. We were not looking at the boxoffice. We just felt emotionally connected to the characters. The film became a hit and it continues to be liked by new generations. That’s the magic of the story. Also, I’d say a major reason for the film’s success was R.D Burman’s music and Anand Bakshi’s lyrics. The music and the words carried the story forward. I remember the premier of Amar Prem was attended by Field Marshall Manickshaw. And the very next day after the premiere the 1971 Indo-Pak war broke out. Kaka and I did many films together. We really worked well together. I was pregnant with Saif during Aradhana and with Soha when Kaka and I did Choti Bahu. Kaka and I had two major problems. He came much too late on the sets and our best profile on camera was the same. So when we were in the same frame together Kaka and I were always trying to get the cameraman to shoot our right profile.” 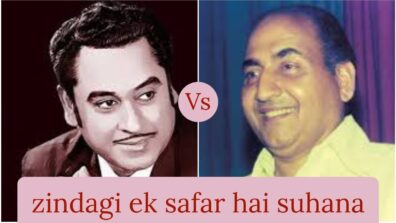