Saif Ali Khan’s elder son Ebrahim, for long desirous of getting into films, is all set to finally take the plunge. A fine cricketer like his grandfather the legendary Mansoor Ali Khan Pataudi, Ebrahim has a choice of making a career of cricket or acting.He has opted for the latter.

And father is all for it.

Says Saif, “Ebrahim seems prepared for a career in acting. And why not? I’d like all my children to be in this profession. It is the best place to work in. I remember at 17-18 I was a mess. Acting saved me from self-destruction. Having the job , the sense of identity it has given me and the job satisfaction and the enjoyment it has given me are more than I could ask for.”

Saif’s daughter Sara is already an in-demand actress. It remains to be seen whether Ebrahim is an instant success as an actor like his mother actress Amrita Singh(her debut film Betaab was a blockbuster) and sister Sara(Simmba a superhit) , or a slow starter like his father whose first film Aashik Awara was a slow starter.

Also Read: I would like Taimur to become an actor: Saif Ali Khan 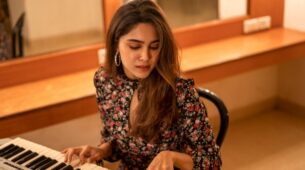