Sohail Makhlai whose last film Knock-out was released eight years ago, finds his new project Dhaakad stuck because of the Coronavirus.

Speaking exclusively to this writer Makhlai who has in past produced the Anubhav Sinha-directed Dus and the Aishwarya–Sunny Deol starrer Aur Pyaar Ho Gaya, clarifies, “Dhaakad was to have its first major schedule in April. Obviously that got mowed down by the virus. We had then planned for July because Kangana’s shooting for her Jayalalitha bio-pic got postponed from July. Now, I don’t see even that happening. I seriously doubt we can start shooting in July.”

So what about the Diwali 2020 release?

Says Makhlai, “Yes, we had announced a Diwali release. We had all the schedules worked out. But the virus has hit the entire entertainment industry. Nobody has a map for the road ahead.”

One thing that Makhlai is sure about is that Dhaadak will be made. and made without any compromise. “My director Razneesh Ghai is a high-profile name in the ad world. He has made three ads with Kangana and she shares a wonderful rapport with him. Our script for Kangana is sure to take her to the next level.”

“We all excited about Dhaakad. But there is no clarity right now about when it would go on the floors. When we put out the poster little did we know what was in store. In Mumbai, cinema seems like very low priority right now. First, we need to survive this crisis. Then we’ll see. Once shooting is resumed we’ll plunge into Dhaakad.” 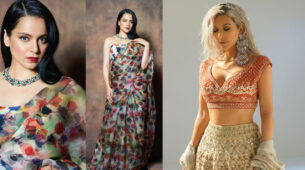