Karan Johar is at the receiving end once again with Kangana Ranaut's sister objecting to his comments. There seems to be no end to Kangana Ranaut-Karan Johar war, thanks to Kangana’s super-vocal sister Rangoli who makes it a point to lash out at Karan each time things seem to be getting calm between them.

After both Karan Johar and Kangana Ranaut were honoured with the Padma Shri, Karan was gracious enough to declare he would work with Ranaut in spite of their differences, if at any time there was a script for her.

Karan Johar refused to comment on Rangoli’s attack. But a very close friend of Karan Johar commented, “Karan was just being polite. He has no intention of ever working with Kangana.”

Trolls have pointed that Karan Johar’s Ae Dil Hai Mushkil was a hit while Kangana’s latest release Panga is a flop. 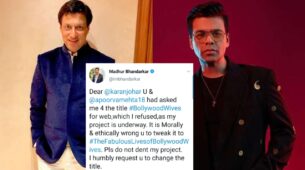