The Mumbai film industry is back to doing what it knows best. Last week shooting resumed in Mumbai with a whole lot of anxiety and enthusiasm

The first major production house to bell the cat was Excel Entertainment jointly owned by (actor-filmmaker) Farhan Akhtar and Ritesh Sidhwani. Two of their pending projects which needed immediate attention, resumed shooting amidst strict guidelines laid down by the Maharashtra government.The two projects a comedy Hello Charlie and a gangster drama Dongri To Dubai were waiting their turn.

Farhan Akhar co-producer of the two above projects says, “Getting back to work is a relief and a joy but given the times we’re in, it’s important to be socially responsible and keep the environment hygienic for the crew and cast. They work to create. We work to keep them safe.”

Actor Aadar Jain (cousin of Ranbir and Kareena Kapoor) who plays the title role in Hello Charlie says the shooting was unique. “We didn’t hug each other when we met on the set. We removed the mask only when the camera rolled. We have to take off our masks for the shot.I keep it in my back pocket and put it back on immediately after as well as sanitize my hands. The rest of the crew were all in PPE kits and socially distancing so I was extremely safe and comfortable. Farhan and Ritesh’s Excel Entertainment really did an incredible job to make this shoot comfortable.”

Yoodlee Films, the film-production branch of Bollywood’s biggest and oldest music company Saregama has started shooting for two full-fledged feature films. The first one is a film titled Comedy Couple starring Saqib Salim and Shweta Basu Prasad, in Mumbai and is directed by Nachiket Samant. The second is a Marathi film Zombivali a horror comedy directed by Aditya Sarpotdar and starring popular Marathi stars Amey Wagh, Lalit Prabhakar and Vaidehi Parshurami, which will be starting shoot this week in Latur.

The producers say,the production dynamics have been chalked out to the most meticulous of details, with the set being armoured with the most extensive of precautionary measures against the pandemic.

Siddharth Anand Kumar, Vice-President, Films and Events Saregama, says people from the production house have been in touch with health-care experts to monitor every shooting schedule. In fact, they have designated a ‘COVID Officer’ on the set, who is in charge of ensuring the strictest measures of hygiene and sanitization is followed.

Says Siddharth, “We needed to resume shooting to avoid starvation among the daily wage-earners We have employed specialised personnel on the sets who are responsible that all health and safety measures are strictly followed. Though we have masks, face shields, and sanitisation tunnels in place, these COVID officers will reinforce our safety efforts. COVID is a reality we are all grappling with, but to mouth, the cliché – the show must go on, albeit with a twist here and there . We are always on the lookout for even the slightest of symptoms and we will tackle them on a war footing but with a calm, rational approach”

“About time!” says Bollywood spokesperson and filmmaker Ashoke Pandit. “How long could the daily wage-earners of the Hindi film industry—the lightmen, the spotboys , the makeup persons—remain at home jobless? They were on the verge of starvation.”

By a conservative estimate the Indian entertainment industry has lost over 1,000 crore rupees (US dollars 133 million) during the four months of lockdown. the revenue losses suffered by the Hindi film industry so far, trade expert Taran Adarsh places the number at Rs1,000 crore-plus while Nagpur-based film exhibitor Akshaye Rathi places the number much higher at Rs 3,000 crores(US dollars 402 million) or even more!

Says Ashoke Pandit angrily, “Producers refuse to pay the grassroots workers. They can’t dare to do the same with the actors. So the daily wage-earners have taken the brunt of the lockdown. I am glad Farhan Akhtar and Ritesh Sidhwani have taken the initiative to resume shooting.”

Actor Akshay Oberoi who shot to fame with the digital webseries Selection Day, returned amidst the Coronavirus scare to shoot for a film directed by K U Mohanan.

Oberoi says he was underwhelmed by the experience. “This can’t be the way forward though.This can’t be the new normal. Can’t work like this. It’s restrictive.In one take I felt like hugging my co-star.It felt like the right impulse for the scene. And then suddenly I was thinking about Covid and whether it’s appropriate or not. That really throws you out of the scene. Hard to be in the moment. But perhaps it’s just a matter of getting used to?”

Actor-activist Sonu Sood who has been on the streets throughout the pandemic helping thousands of stranded migrant workers reach home , feels going back to shooting is the only way out. “The Virus is not going anywhere.It’s good that the shooting has resumed. We need to understand that we don’t need to stay locked away in our homes indefinitely. If we take the necessary precautions we can shoot without getting infected.There are so many techninicians whose wage depends on shooting. Actors have to come out and shoot. It’s time we took a little bit of risk for the larger good.”

Director R Balki (Paa, Padman, Chinee Kum, Shamitabh) who shot an advertisement with Akshay Kumar during the lockdown says more and more of Bollywood needs to get over the fear of the Virus and resume shooting. “At our shoot we did what other filmmakers will do when they get back to shooting, like getting back to work with social distancing,sanitised outdoor set, disinfectant screen, masks… the works.We got used to it in a few minutes. Minimal 20-people crew.Very strict protocol…and we found we can do it quite easily.”

However Shibasish Sarkar CEO Reliance Entertainment is somewhat circumvent in assessment of the future. “Yes shootings have re-started but there are uncertainties which we need to be cognizant of. I foresee that producers will try to complete unfinished portions.Or if some days of shooting are left ….to complete those. I heard Ritesh Sidhwani has started shooting. I hear (producer) Vashu Bhagnani will start next month Bell Bottom starring Akshay Kumar…. interesting…. my personal view is , producers at large will take slightly more time to get fully back into production.”

Television star Karanvir Bohra too has resumed shooting. “I have just shot a web series .I am not in the least intimidated by the pandemic. I hired a flat in the building where I live and shot with a crew of four persons. We have to get back to work if we are to save the entertainment industry.”

Actor Amit Sadh whose co-star in the digital series Breathe : Into The Shadows Abhishek Bachchan tested positive for Covid-19, says he has begun shooting again. “I am not afraid of the virus any more. How long can we stay locked away? It’s time to wear masks take all necessary precaution and just….shoot!”

Salman Khan was all set so resume shooting for his almost-complete action drama Radhe: India’s Most wanted Bhai. But for now, he has decided to keep put his plan on hold, apparently because his immunity system is low after neurological surgery some years ago. Also, a close friend of his informs me, “Bhai is prone to colds and coughs. He is always sniffing.”

Actor-director-choreographer Prabhudheva who happens to be the director of Salman’s Radhe: India’s Most Wanted Bhai feels it is time to return to shooting. “I am going to start shooting for my three pending Tamil films where I play the lead. As far as the resumption of Salman Khan’s film is concerned, we can’t take the risk until we’re fully certain it is safe.” What makes Ritesh Sidhwani stand out as a producer? 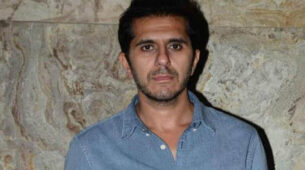 What makes Ritesh Sidhwani a real visionary in Bollywood