Oh So Hot!! Sizzling Pool Looks Of Shahid Kapoor Will Make You Sweat, Have A Look | IWMBuzz
Movies | Photos

Bollywood actors look damn hot and the pool pictures of the actors are just superb. The actors always slay their picture by giving hot looks. Shahid Kapoor is the most handsome and charming-looking actor of Bollywood who is known for his hottest looks. The actor looks smoking hot without a shirt and his toned body just makes us go crazy over him.

The excellent looks of the actor have made him achieve a huge number of fans. He has also starred in several films and has given super hit films. The pool picture of the actor will astonish you and also feel you going on a vacation. Now the summer is here and the pool pictures of the actors will make you go drive in the pool. The actor is seen wearing sunglasses and giving hot poses and we just can’t stop drooling over him for his hot looks.

He has posed for several hot pictures and flaunts his toned arms in his pool pictures. The actor is seen enjoying himself and his sassy pool pictures are marvelous. Shahid Kapoor is overloaded with the hottest looks and is rocking the industry since the 90s. He is popularly known for his romantic and action films. Fans have showered immense love for his sizzling hot looks. The actor has become a crush of numerous people and he is a very fun-loving person and makes his fans happy with his hottest looks.

Check out the pool picture of Shahid Kapoor and stay in space with IWMBuzz.com. 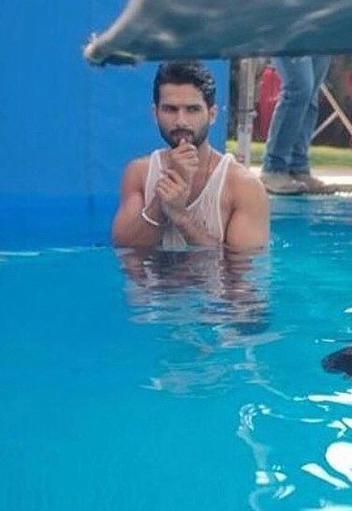 Hot Toned Body: Hrithik Roshan Vs Tiger Shroff Vs Shahid Kapoor: Who Is Your Fitness Inspiration?