Priyanka Chopra and Nick Jonas are quintessential couple goals one and all and in today’s hook-up culture, ‘Nickyanka’, as they are fondly called by their fans are that one couple who validate the fact once again that for a couple to stay together, all that’s needed between them is a strong bond of love and nothing else. It is to be noted that they met for the first time at Met Gala 2017 and since then, their affection and camaraderie became stronger than ever and after about dating for a year, they decided to tie the knot in 2018. Not many are aware of the fact that Priyanka and Nick started talking to each other on Instagram soon after their Met Gala meeting and that’s how the friendship enhanced between the two initially.

Over the years, Nickyanka has given the paps enough opportunities to capture their lovey-dovey moments and hence today, we show you some of those priceless moments which are all about ‘couple goals’. Take a look at the photos below – Also Read: Are You A True Fan Of Rashami Desai? Take This Quiz Right Away & Check Your Score 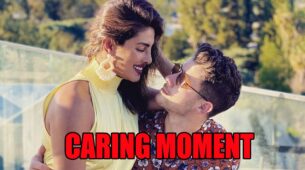