Kartik – Sara the young Jodi of Bollywood is coming to meet us with Imtiaz Ali ‘s upcoming movie Aaj Kal. Kartik Aryan is an upcoming young and talented actor, with only 3-4 movies under his belt he has already become a favorite of many people. He began his Bollywood acting career through the movie ‘Pyaar Ka Punchnama’. Sara Ali Khan just has 2 movies Simmba and Kedarnath and she was impressive in both the movies, the audience loved her for her acting abilities. Kartik Aryan and Sara Ali Khan are young emerging talents of Bollywood, this Jodi is also being rumored to be dating each other. We don’t know if the rumors are true or not, but both of them make a great Jodi.

The amazing Jodi will now be seen together on-screen though Imtiaz Ali’s upcoming movie Aaj Kal. This movie is a sequel of 2009 release Love Aaj Kal which starred Sara’s father Saif Ali Khan and Deepika Padukone. Nothing confirmed but according to the gossips received the movie is scheduled to release somewhere in 2020. 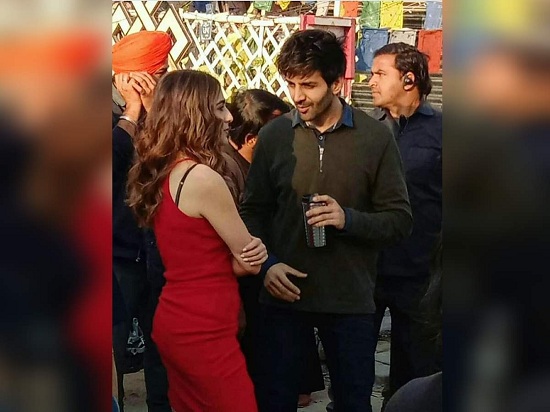 The above picture is one of the behind the scenes candid click of this movie’s shoot. Imtiaz Ali even shared a post of his Instagram handle of this lovely couple.

the oxygen that makes the film breathe #aajkal @saraalikhan95 @kartikaaryan (clicked during the first few readings of the film, before shoot began)

Looking at the picture and the posts we can see that the Jodi as engrossed themselves in the character. And we really are very excited to watch them on-screen together.