Asim Riaz became a household name ever since his participation in India’s biggest reality show Bigg Boss. Asim was a finalist in Bigg Boss season 13 and his charming good-looks and his romantic inclination towards his fellow contestant Himanshi Khurana kept him in the limelight for the longest time. Soon, Riaz became a rage and as soon as he came out of the house, he bagged projects in and out.

Asim bagged two big music videos, one of them was with T Series and the other with Neha Kakkar which featured him and Himanshi Khurana.

So during the promotions, Asim had uploaded a video where he was seen sitting in between Himanshi and Neha and he was trying to impress both.

But whom could he actually impress at the end? Well, none. That’s the hilarious part of the video. He was constantly getting torn as to whom to impress and that got the better of him. Check out the video below –

Thank you is the only word I can say to you alll !!! #KallaSohnaNai trending no 1 world wide ! @nehakakkar @iamhimanshikhurana #asimriaz 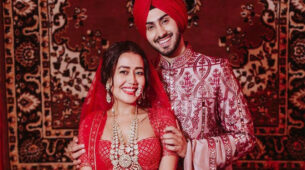 Shreya Ghoshal VS Neha Kakkar Vs Sunidhi Chauhan Vs Kanika Kapoor: Who Is The Highest Paid Singer In 2020? Know About the Secret Connection Between Avneet Kaur, Neha Kakkar And Rohanpreet Singh