Will Singer Jonita Gandhi Be The Next Big Thing In Bollywood? | IWMBuzz
Subscribe Now
Music | Celebrities

Let’s have a brainstorming on the question that will Jonita Gandhi be able to become the next big singer in Bolywood. Famous in the Indo-Canadian community as the Toronto’s Nightingale Jonita Gandhi is Indian Born Indo-Canadian Singer. Jonita has adapted herself to many languages and has recorded for multi-language songs including Hindi, English, French, Tamil, Punjabi, Gujrati, Telugu and many other languages. She rose from singing a small gig for family event organized by her father to doing a playback for multiple language songs.

Here are a few of her Bollywood playbacks that will prove to us that Jonita will definitely be the next big thing for Bollywood Music.

1. Chennai Express Title track- Composed by Vishal-Shekhar and sung by Jonita Gandhi and music legend S.P. Balasubrahmanyam, the title track for SRK starrer Chennai express proved to be a superhit track as soon as it released.

3. Sau Tarah Ke- This dance number was loved by the audience. The combination of Jonita’s melodious voice and Jacqueline’s dance moves was just amazing to watch in the movie Dishoom.

4. Break Up Song- How can we forget the Break up song from the movie Aye Dil Hai Mushkil. Audience loved the track very much. The song was composed by Pritam and became a superhit.

From soulful songs to dance numbers Jonita has sung everything. Looking at the versatility and variety of songs recorded by Jonita are enough to prove that She definitely will be the next big thing for Bollywood Music. 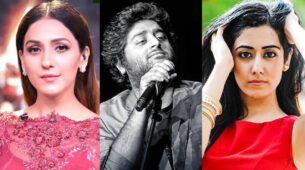