Anushka Sen and Siddharth Nigam get together for a new project Anushka Sen is a popular TV actress, who is known for having acted in many television shows such as Baal Veer, Devon Ke Dev…Mahadev, Fear Files, Kitne Door Kitne Paas, Internet Wala Love, and many more. Her last TV outing has been Jhansi Ki Rani.

Like any other girl of her age, Anushka Sen is quite active on social media and has more than a million fans and followers. She keeps experimenting with her looks, posts pictures and keeps her fans updated through Instagram and Facebook. Anushka Sen is currently on a high, as she has bagged her first international project, the Indo-Hollywood feature film Country Of Blind, set in the Indian Himalayas.

Based on a book by H.G.Wells, the one of its kind Indo-Hollywood film is being directed by the Indian international filmmaker, Rahat Kazmi and also stars well-known actress, Hina Khan.

Today, Anushka Sen shared an interesting post on her Instagram, where she announced that she’s slated to appear in her first music video, Gal Karke, for the digital music label, Desi Music Factory. The song has been sung by Asees Kaur, and will feature TV Na TikTok star, Siddharth Nigam, alongside Anushka Sen.

SURPRISE 💙 My first Music Video ‘GAL KARKE’ with Siddharth is coming out soon!!! Soooo happy and blessed to start this beautiful journey with @desimusicfactory ❤️ Also, it was so lovely to work with @thesiddharthnigam 💘 Singer: @aseeskaurmusic 💕 So stay tuned Anushkians !!!!!! . . #musicvideo #anushkasen #siddharthnigam #desimusicfactory #poster #staytuned

We wish Anushka all the best for the music video, and all her future endeavors! 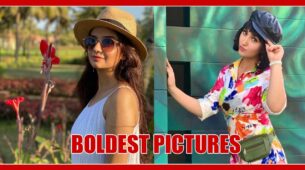