There is not one word that would describe who Kishore Kumar was. He had numerous qualities and skills. He did many things from singing to acting as well as directing and producing. He gave his voice to songs in multiple Indian languages like Bengali, Marathi, Gujarati, Bhojpuri, and many more. He has won several awards and recognitions.

Though Kishore Kumar left at a very young age, he is still believed to be alive with his tracks. His songs will keep him among us forever without getting old. There was also an award by Madhya Pradesh government in his honor for the contribution to the cinema. During the period of emergency, the Indira Gandhi government asked all the artists to propose their propaganda to the masses. But when Kishore Kumar denied this request, he was banned on Doordarshan and also restricted from performing.

When an unreleased last song by Kishore Kumar was put up in auction, it got sold for 1.56 million at the Osian’s Cinefan Auction, New Delhi in 2012. This shows how much Kishore Kumar was valued, and people adore him.

Here are a few spectacular tracks by Kishore Kumar that will be evergreen forever. 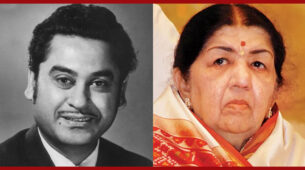 Udit Narayan VS Kishore Kumar: Whose Songs Get You Lost In Your Though... Mohammed Rafi-Kishore Kumar: The Musical Duo That Changed The Definiti...