Arijit Singh is now the most sought-after singer in India. He has won millions of hearts with his singing skills and many fans have already fallen in love with his voice. He takes a person with his melodious flow.

Arijit Singh started his career with ‘Phir Mohabbat’ for Mahesh Bhatt’s Murder 2. Everyone loved and praised the rising superstar and it was ‘Tum Hi Ho’ from Aashiqui 2 that was a huge blast and a turning point in his career. Arijit has till now delivered a number of hit songs. His voice has magic in it and makes us live the moment.

Arijit was the ruling singer of ‘Ae Dil Hain Mushkil’, from which all the songs were hit and especially the ‘Channa Mereya’ that had again won the hearts of people. Arijit has a different feel in his voice and that touches the heart of the listener. One can never really get bored of listening to his songs on a loop.

Arijit is a versatile singer and sings in various film industries across India. Today let us take a peek at some of his most heart-touching Punjabi Songs:-
1. Ve Maahi- 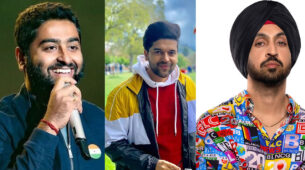