The one to have left a remarkable mark on the Bollywood music industry with his soulful voice is Udit Narayan. The one who has sung a number of Hindi Bollywood tracks has also been the only artist to have won awards from the 1980s to 2000s. A contribution to be in awe of commenced after the successful soundtrack for the movie Qayamat Se Qayamat Tak came in 1988. A soundtrack that was not just a considerable blockbuster but sold 8 million copies.

The title song from David Dhawan’s film Mujhse Shaadi Karogi is amazing. The movie made a profit of 565 million rupees and was the third-best movie for 2004. The movie had Akshay Kumar, Salman Khan, Priyanka Chopra as the lead and was a romantic comedy. The film also had one of the highest-selling soundtracks from which Udit Narayan’s Mujhse Shaadi Karogi was a hit. Who hasn’t heard this song and not tried the iconic step by Salman Khan? Dancing with towels in between your legs. The song was a musical hit and topped the charts. Udit Narayan never misses to impress and has always given some great high pumping numbers.

Another major hit from the movie Qayamat Se Qayamat Tak was Papa Kehte Hain. The one that was also remade with a little twist of its own for Student Of The Year movie. In the track, we see young Aamir Khan lip-syncing to the track voiced by Udit Narayan. The track depicts the said reality that still exists today’s expectations from parents not taking into consideration what their kid truly wants. And that’s the sad fact that has always been for a long time. A beautiful song that everyone could relate to and Udit Narayan made the listening experience more jolly with his voice.

Which of the two earlier mentioned tracks by Udit Narayan is your pick? Mujhse Shaadi Karogi or Papa Kehte Hain. Let us know in comments.

Also Read: Kumar Sanu VS Udit Narayan: Who Is The King Of 90’s Bollywood Music? 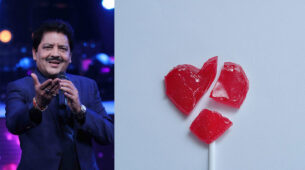