Anushka Sen in one shoulder top or high neck churidar: The look you love the most? | IWMBuzz
Subscribe Now
Television | Celebrities

Which avatar of Anushka Sen do you like more? Anushka Sen is one of TV industry’s prettiest girls and the she has already achieved quite a lot in the early stages of her career. Not just TV, Anushka enjoys a huge fan following on social media as well and everytime she drops a photo on her social media, fans go crazy.

However, seems like her fans are divided in terms of opinion regarding what avatar looks best of the Jhansi Ki Rani actress. While some feel the hot and sexy western avatar where she’s seen slaying in one shoulder top looks best on her, others feel the traditional high neck churidar looks best on her. Well, how about the best of both the looks? Check out both her looks and let us know your views in the comments below.

Anushka means first petal of a flower, first leaf of a tree, first ray of the sun, and it also means grace. 💫 . . Necklace: @mahiara.official ✨

Also Read: The title track of Apna Time Bhi Aayega brings out the essence of the character brilliantly: Anushka Sen 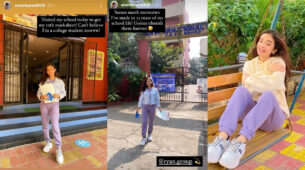 Anushka Sen talks about her 'fantasy'