It is important to do negative roles: Krishna Mukherjee aka Aliya of Yeh Hai Mohabbatein
Subscribe Now
Television | Celebrities

Krishna Mukherjee who is presently seen in Yeh Hai Mohabbatein and will soon enter Naagin 3, gets into a conversation. Talented and popular Krishna Mukherjee is happy to be playing the daughter of actress Anita Hassanandani in the shows Yeh Hai Mohabbatein and Naagin 3.

Says Krishna, “I will soon be entering Naagin 3 in the role of Vishakha’s daughter, Tamsee. As you all know, I play the role of Aliya, again daughter of Anita aka Shagun in Yeh Hai Mohabbatein. It feels great to be called Anita’s daughter in both the shows (smiles).

Krishna who has been portraying the role of Aliya for three years now, says that there is not much of a difference between Aliya and her real self. “I don’t know whether I will be the ideal daughter-in-law in real life yet (smiles). Otherwise, I am very close to what Aliya is.”

When she got offered the role in Yeh Hai Mohabbatein, Krishna had the inclination of doing only positive roles. “Earlier, I was not keen on doing this role in Yeh Hai Mohabbatein. However I was told that being an actor, one should look for variations in characters. Frankly, I did not want anyone to hate me. But now I realize and understand that it is important to do such roles. And I am doing it now (laughs).”

Talking about the problematic situation that Aliya finds herself in, she explains, “My role is going great. Aliya is in a confused state of mind as of now. She is bipolar and finding it difficult to choose between Rohan (Abhishek Malik) and Adi (Abhishek Verma). She is madly in love with Adi right now. On the other hand, Rohan feels betrayed and is taking her case. Let us see how the story pans out.”

Ask her about her role in Naagin 3 and she states, “I have not started to shoot for Naagin 3. All I know is that she is Vishakha’s daughter; hence has to be the evil one (smiles).” 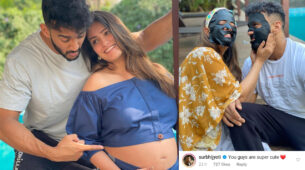