The actress keeps sharing photos and videos from her show Kasautii Zindagii Kay, and even from her personal life, on her social media handle.

She receives lots of love from her fans and audiences. She is one of the most followed Indian television actress on social media.

With her ever-increasing social media following, Hina Khan today completed 5 million followers on Instagram today, which is a great milestone for her and also her fans.

She wanted to celebrate this special moment with her fans, so she came live on her Instagram for the same.

The video featured a beautiful cake which had an Instagram logo on it. It had text written on it, which said “Celebrating 5 million Instafamily of Hina Khan” and it also had a tag below, which said “HINAHOLICS” 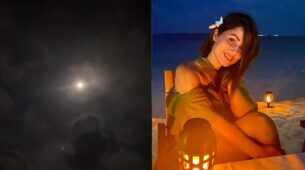