The mom of four shared a nice idea for all the parents out there... Kim Kardashian is an American model, businesswoman, socialite and an actress as well. She is well known for the reality television series Keeping up with the Kardashians. Kim Kardashian is married to rapper Kanye West and is a doting mother of four. Currently, she is self quarantined in her house along with her husband and kids. Taking care of four kids indoors can be a task but Kim is doing her best to have fun with the family.

The actress explained that she has organised all the pictures of her kids and made a separate folder for each child. She shared a picture of Chicago busy stacking blocks on Instagram and wrote, “The best thing I’ve been doing is organizing all of the pictures in my phone and making folders for each of my children.” Isn’t it a great idea! Kim Kardashian is certainly a great mother and capturing all the cute moments of her kids and storing them separately is indeed a fantastic idea. Parent’s out there, are you all taking notes?

The best thing I’ve been doing is organizing all of the pictures in my phone and making folders for each of my children. 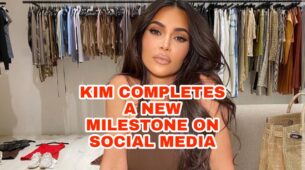