For the unversed, the first season starred Arjun Bijlani, Aalisha Panwar, Nia Sharma in the lead roles. It ran for around two years and ended last year in June.

Season 2 kicks off with a murder committed by none other than Vansh aka Rrahul. Kabir, who is a young cop, promises not to forgive Vansh for killing Neha. Kabir then chases Vansh’s car on his bike in a heroic way. Then the two reach a shipping container storehouse near the sea. Later, the two engage in a verbal brawl and soon enough the two start fighting and Vansh hits Kabir hard and leaves him injured.

Later, we see Riddhima waiting for Kabir with a romantic setting at their favourite point. However, after waiting for long sudden lightening and strong winds ruin the entire romantic set up done by Riddhima. This scares her and she starts weeping and starts calling out for him. Kabir somehow manages to reach the location Riddhima told him to, but in a very bad condition. The two meet and Riddhima takes care of Kabir.

In the next scene, Kabir proposes Riddhima with a ring on a beachside. Riddhima is glad that Kabir is now fit and fine. After expressing his love for Riddhima, Kabir asks for something in return which startles her immensely. Kabir tells Riddhima, that Vansh is not a businessman but an underworld mafia, who is in the business of gold smuggling, drugs, real estate scams and whatnot. Hence, he needs someone to work for him in order to disclose all Vansh’s details and find evidence against him. Riddhima agrees to work for Kabir and help him track down Vansh so that she can peacefully live a life with Kabir after that.

Helly Shah is perfect to play Riddhima, she can easily pull off a simple girl-next-door look with aplomb & assurance. She easily convinces us as a sweet demure girl. Rrahul looks suave and debonair in his corporate look as Vansh. His character is mysterious and hooks us to the plot. Vishal plays the cop who is on a mission to expose Vansh’s evil work. The actor makes quite an impressive mark in the first episode of the show. The show has started on a good note and it’s a revenge-drama so we need to wait and watch for the story to unfold.

In today’s time, it is hard to find a girl like Riddhima, who sacrifices her love for her partner’s mission. In the upcoming episode, when Riddhima and Vansh would be together, the pairing of Helly and Rrahul would look new but unusual.

Ishq Mein Marjawan has started off on a good note and has created a good amount of suspense in its first episode. We really hope that the thrill factor continues in the show.

IWMBuzz.com credits the show 3.5 out of 5 stars.

Also Read: I am not under pressure but certainly nervous: Helly Shah on Ishq Mein Marjawan 2 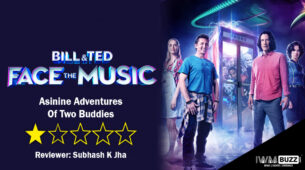