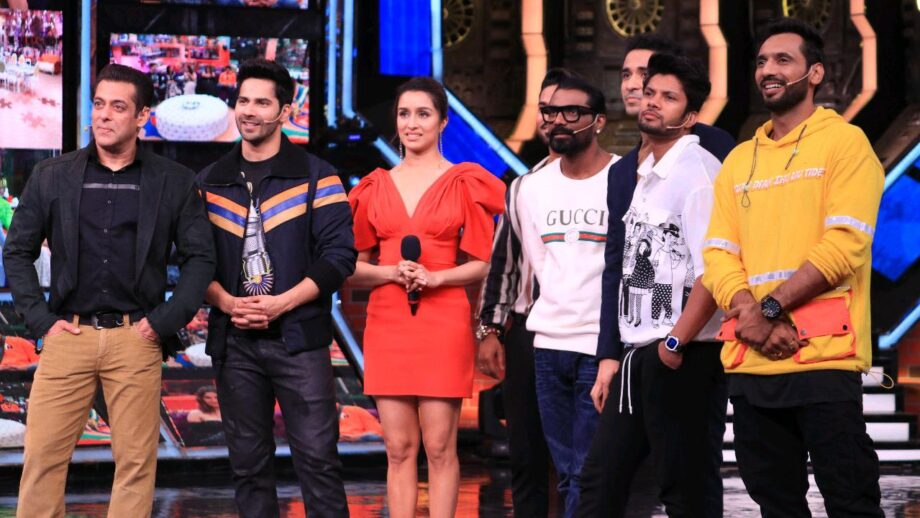 This weekend is full of surprises for the Bigg Boss contestants and after some intense discussions on Saturday, it is time for some fun. Salman Khan welcomes Varun Dhawan, Shraddha Kapoor and the entire team of movie Street Dancer including Raghav Juyal, Salman Yussuf Khan and others. Raghav is extremely happy to his friend Sidharth and greets him with much enthusiasm through MeTV. Raising the temperature indie and outside the house,Varun gets Sidharth, Paras and Salman Khan to perform the hook step of ‘Garmi’. Furthermore, Salman Yusuf Khan advice Rashami dances her worried away while Shehnaz croons the song, Illegal Weapons.

Later, Varun Dhawan and Shraddha Kapoor enter the house and greet all contestants.Varun has all praises for Sidharth and shares his experience of working with him. He says he had a great that sharing screen space with Sidharth and that he a very gentle person. He also adds that Sidharth used to be protective of him and Alia while shooting at crowded locations. Varun also expresses that watching fights is interesting but it’s getting extreme now, and they should keep things in check.

Up next, Varun and Shraddha give a task to the contestants wherein they have to play musical chairs blindfolded while Varun and Shraddha keep moving around the chairs. Later Remo D’Souza enters the house with a big surprise. Unfolding the mystery, he says that Bigg Boss is giving them another chance to get immunity by reviving the Elite club task. The contenders for Elite Club will be screened through an interesting task. Clocks with pictures of will the contestants except Asim are placed on a wall and in round two contestants are asked to break the clock of the contestant they don’t feel deserves to be in the Elite Club. After four contenders are elected, they announce that there will be another task to select the winner about which Bigg Boss will inform them at the right time.

Riya Shukla who plays the lead protagonist, Pinky, in COLORS’ upcoming show Naati Pinky Ki Lambi Love Story, comes on stage and interacts with Salman. He praises Riya for her and enters the house through Me-TV. Talking about the show and her character, Riya and Salma play a quick and fun question-answer segment with the contestants.

Who will become the Elite Club member?