Tina Philip aka Ishani of Ek Bhram Sarvagun Sampanna shot for a harness sequence for the track related to Ishani’s kidnap. Ek Bhram Sarvagun Sampanna the Star Plus produced by Dipti Kalwani’s Sunny Side Up show will see a huge stunt sequence with the kidnap of Ishani (Tina Philip) at the hands of Manohar.

Tina who essays the role of Ishani, sister of Jhanvi Mittal (Shrenu Parikh) got to perform daring stunts on the harness for this sequence wherein she had to be hanging for hours just above the huge lake.

It so happened that the dupe of Tina started to shoot for the sequence and was on the harness, while she fainted mid-scene. The Director saw no movement in the dupe, who was tied in thin air. This was when the girl was pulled down and was treated.

Unfortunately, the duplicate could not resume shoot and it was left to actress Tina Philip to shoot for the harness sequences.

We hear that Tina being a sky diver herself, had no problems whatsoever and happily volunteered to shoot for the toughest part.

As per a reliable source, “Tina had to be tied up for hours, starting from morning to afternoon with the sun hitting hard on her. However, Tina managed to perform the stunt scene without any trouble.” As per the sequence in Ek Bhram Sarvagun Sampanna, Manohar will kidnap Ishani and will summon Janhvi to the place.

While Janhvi will struggle and plead with Manohar to leave her sister, Manohar will tie up Ishani from the top right below the lake and will threaten to cut the rope that holds Ishani safe. He will create a huge shock for Janhvi and will scare her of her sister’s death in the lake below.

While it remains to be seen whether Janhvi succeeds in saving Ishani, this sequence for sure will be a nail-biting one with Ishani aka Tina Philip hanging between life and death.

We buzzed Tina but could not get through to her.

Kudos to Tina for carrying out this stunt sequence herself!! 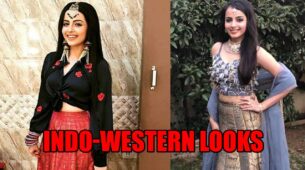