Shriman Shrimati the comedy show will now in all probability launch on SAB TV. One amongst the list of shows made for Happii was the return of the iconic comedy show, Shriman Shrimati!! The fun series which originally starred actors Rakesh Bedi, Reema Lagoo, Archana Puran Singh was supposed to be re-packaged to suit the present TV viewing audience.

However, the abrupt halt to the channel’s launch had put the shows on the back-burner!!

But now, we have some happy news for the fans of this entertaining comedy concept!!

News coming in is that Shriman Shrimati, which was shot for Happii, might see dawn on SAB TV instead!!

A credible source tells us, “Nearly 40 episodes of the series have been shot already. It was to air on Happii. But now, with Adhikaris trying to sell out their concepts to other popular GECs, a deal is being worked out at the moment between the team at Adhikaris and SAB TV. If the deal happens, Shriman Shrimati will go on air on SAB TV from March 2018. Having said this, things need to fall in place regarding the cast too. Even though many episodes have been shot, some of the actors brought on board Shriman Shrimati are presently busy with other shows. So few major decisions need to be taken before the final announcement will be made.”

Shriman Shrimati for Happii was being made by BBC Worldwide Media and was helmed by Rajan Waghdhare, the ace Director.

We contacted the spokesperson at BBC, but did not get to hear from them.

Director Rajan Waghdhare told us, “Yes, things are in process. That is what I can say.”

We reached out to Markand Adhikari to know about the present status of this iconic show, but did not get revert from him.

We also reached out to Neeraj Vyas, EVP and Head, Channels SAB and Max but did not get response till the time we filed the story.

Will the Adhikaris be successful in getting into this deal with SAB TV? Only time will tell. 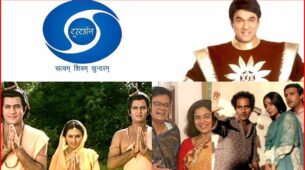