Colors’ recently launched show Tu Aashiqui (Guroudev Bhalla) will see the entry of actor Buneet Kapoor in the role of Vikram Dhanrajgir, son of Jayant Dhanrajgir played by Rahil Azam (as reported by us).

IndianWikiMedia.com had earlier reported about the track proceeding towards the engagement and wedding of JD’s son, Vikram.

Now entering the show as the love interest of Vikram will be actress Shagun Sharma. Shagun was recently seen in the Barun Sobti show on Star Plus, Iss Pyaar Ko Kya Naam Doon 3.

As per sources, “Richa, the character to be played by Shagun will be a positive girl who would be in love with her boy friend Vikram. She will have a very important role to play in the life of Pankti (Jannat Zubair Rahmani), the female lead of the show.”

When contacted, Shagun confirmed the news to IndianWikiMedia.com saying, “Yes, I am shooting for Tu Aashiqui. This is my first day of shoot. Hence I know very little about the role and need to get a brief.”

Gear up for the next interesting twists in the show with this new entry. 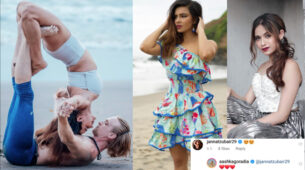