Krystle D'souza and Nia Sharma might re-unite for Naagin 4 Colors popular show Naagin by Ekta Kapoor’s Balaji Telefilms is all set to start its fourth season. The producer recently dropped a teaser of the supernatural thriller.

In the teaser, one can see two naagins, dressed in black and gold attire respectively, who are back again to seek revenge. The teaser looks promising.

Now, if sources are to be believed, the maker is keen on getting Krystle D’souza and Nia Sharma both onboard together.

For people who are not aware, Nia and Krystle, who became a household name with their hit show Ek Hazaaron Mein Meri Behena Hai, were appreciated for their acting chops. They were also loved by fans and now, Naagin 4 might have the two playing the naagins in the show.

In the first season, Mouni Roy and Adaa Khan were seen as ichhadhari naagins. The two actresses also gained immense fame through their portrayals.

However, the final decision is yet to be taken. We hope fans get to see Krystle and Nia again.

We buzzed the actresses but did not get through for a comment.

We also reached out to Producer Ekta Kapoor and the channel spokesperson but did not get revert.

Mouni Roy goes dark and sexy in her new look 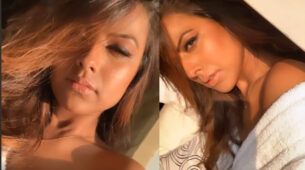