Good news for all Naitik fans. Yes, IWMBuzz sources have exclusively learnt that popular and talented actor Karan Mehra will soon be back on screen, entertaining his fans, in a new project.

As per grapevine, Karan, who eternalised the role of Naitik in Star Plus show Yeh Rishta Kya Kehlata Hai, is set to add his classic touch in an upcoming family show for Zee Punjabi.

Says a source, “Karan will play the male lead and he will share screen space with a newcomer. The plot is a wholesome family entertainer. It is expected to air soon.”

A middle-class boy, Karan Mehra was born in Punjab but moved to Delhi at a young age. After getting to Delhi, he got himself enrolled for the Fashion designer course at NIFT (National Institute of Fashion Technology). He was a topper in his batch at the university.

Then he got to work with well-known directors like Rajkumari Hirani and Ram Gopal Verma. Later, he also appeared in the movie, Love Story 2050. After the movie, he appeared in various commercials and advertisements and also did modeling. After that, he got the breakthrough role of Naitik Singhania in Yeh Rishta Kya Kehlata Hai.

Karan Mehra worked in Yeh Rishta Kya Kehlata Hai for more than 7 years and became a household name. The show also got to the new heights, thanks to his acting stints.

The source further adds, “Karan fits the role perfectly. He is an apt choice. Zee Punjabi shows have always entertained audiences and this show promises to be a must-watch.”

We buzzed Karan to solicit a comment but he did not revert till the time of publishing the article. 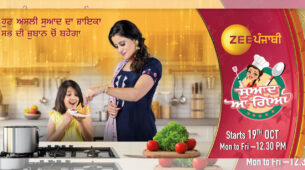 Bored of everyday cooking? Spice it up with Zee Punjabi’s Swaad Aa Gaya