Indian Idol 11 the ongoing singing reality show on Sony TV no doubt has a group of great singers as contestants and the perfect platform is set to welcome the Top 10 this week and take the music to the next big level on the show.

However, the reality show has also bagged prominence and popularity for Anu Malik’s return after being spoken about in the #MeToo Controversy.

Now it is his co-judge Vishal Dadlani’s turn to face the music, as the popular music composer has landed himself in problem with his recent tweet about former CJI Ranjan Gogoi’s retirement, receiving huge amount of backlash.

Vishal had tweeted “Goodbye, ex-CJI Gogoi, and I hope you can stomach the disgraceful and cowardly legacy you have just left behind this august Office.”

Eversince this happened, there have been many comments pouring on Twitter against the remark made by Dadlani.

The extent to which the protests have gone against Vishal Dadlani can be gauged with netizens now trolling him with #SackDadlaniFromIndianIdol. And there have been many responses coming in against Dadlani’s tweet on the same.

One such tweet reads, “This is very shameful.He is the CJI of India .If someone disrespecting him means he is disrespecting the Indian constitution.And this fellow Vishal has proved to be terrible offender many times. #SackDadlaniFromIndianIdol”

Goodbye, ex-CJI Gogoi, and I hope you can stomach the disgraceful and cowardly legacy you have left this august Office.

I watch Indian idol regularly but now I will not watch it untill Vishal apologize or Indian idol removes him from the show.
Vishal dadlani is now abusing our Ex CJI Gogoi who delivered #RamMandir verdict .@TajinderBagga @ippatel@KapilMishra_IND
#SackDadlaniFromIndianIdol https://t.co/8N9U0TTY9N

Well, only time will resolve this feud!! 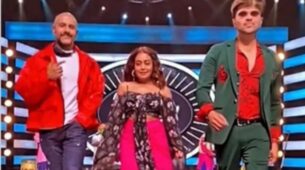