Uncanny as it may sound, well known screenwriter-author-politician Tuhin A. Sinha’s last novel, When The Chief Fell in Love, released in 2018, had actually predicted a Kashmir solution quite similar to the one, unfolding right now.

As we know, the Modi government on 5th Aug, 2019, revoked Article 370 and Article 35A and bifurcated the state of Jammu & Kashmir into two union territories Jammu & Kashmir and Ladakh. A similar resolution had been predicted by Sinha in his last novel in a futuristic concluding chapter of the book set in 2030. He had predicted the reorganization of the state with two districts of Himachal being merged into J&K. Well, while the reorganization plan of the government may not be exactly the same as the one suggested by Sinha, considering that it may still take a few years for the problem to be fully resolved, one can’t rule out some more twists and turns in the Kashmir playout…and who knows, Sinha’s prophecy could well hold in the future discourse.

Says Sidharth Jain, ex Hotstar programming head and one of India’s leading book adaptation agents: “Sometimes, life imitates art- like in Tuhin’s book, in which there is an uncanny similarity to what’s happening in Kashmir with Article 370. Fiction was never closer to reality.”

Says, Saurabh Tewari, well known TV producer, “ While many people wanted Article 370 and Article 35A to go, very few would have predicted the maverick decision to the reorganize the state. That is where, Tuhin’s acumen as a writer and politician stands out,” Kashmir is now a tranquil place, much like it ought to have always been. Article 370, which had inhibited its complete integration into India, stands abrogated. However, its abrogation wasn’t as satisfying as the fact that it happened through the will of the people, in a campaign driven largely by the women of the state. Zaira had personally toured every block of Kashmir and explained the merits and demerits of the article for Kashmir. She had encouraged the people to be big-hearted and opt for sustainable, long-term gains rather than settle for limited, short-term ones. Though the people had their apprehensions, and quite naturally so, they eventually saw reason in our stand. For the ones who remained opposed to removing Article 370, we brought in a fresh law to safeguard their interests. According to this new law, the total land available for sale to non-residents in Kashmir could not exceed 20 per cent of the total land area available in the state. Furthermore, a native of Kashmir could buy a single piece of government land in any other state of the country at a 20 per cent discount.  Incentives were provided for people in the valley to settle in Jammu and vice versa, in order to ensure that the two parts of the state did not resemble ghettos anymore. In fact, some 20,000 Kashmiri Pandit families have been resettled in the valley since then and they have been living peacefully in Kashmir. 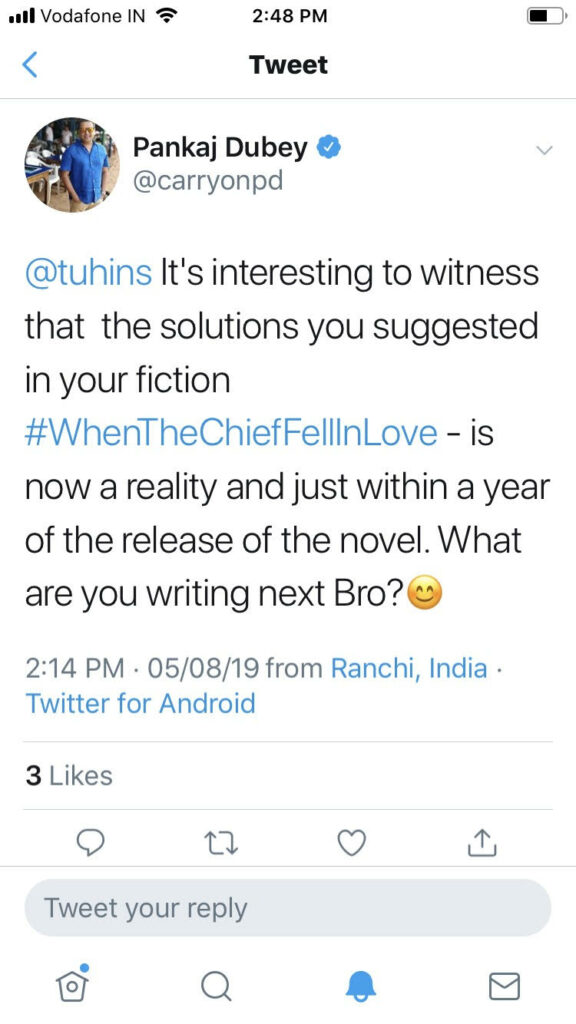 The states of Jammu and Kashmir and Himachal Pradesh were restructured and two districts of Himachal are now a part of J&K. This gargantuan change was made possible thanks to our party being in power in both the states and at the centre. A decision as path-breaking as this was bound to draw its share of flak. In historical retrospect, I am happy to bear this flak, because I know that by creating a more evenly balanced demographic distribution within Jammu and Kashmir, I have saved the state from many future problems. I owe my decisions to my country and her future generations, not to a motley group of outdated journalists who consider me ‘intolerant’

Does the Kashmir immediate solution hamper the book’s film potential? We ask Tuhin.

“Well, on the contrary, you will be surprised to know that there are at least 5 producers who have approached me in the last 5 days enquiring about the book rights. I will have to change the first half of the story. But most part of the book still holds well. In fact, there’s a new journey for Kashmir which has already begun. That will have to be weaved in as well,” says Tuhin.

No wonder many readers have tweeted about the book’s uncanny prophesising ability. We wish Tuhin luck and hope to see this book on screen ASAP.

Review of ZEE5's Kaafir: A compelling narrative, bogged down by its agonizingly slow pace