Widely acknowledged as the greatest ever in T-20 format, West Indies batsman Chris Gayle is the one to watch every Indian Premier League (IPL). The Jamaican with his imposing, burly frame is one of the most intimidating men with a bat on the cricket pitch, no matter the format. Bowlers fear him, his team rely on him and fans love him. 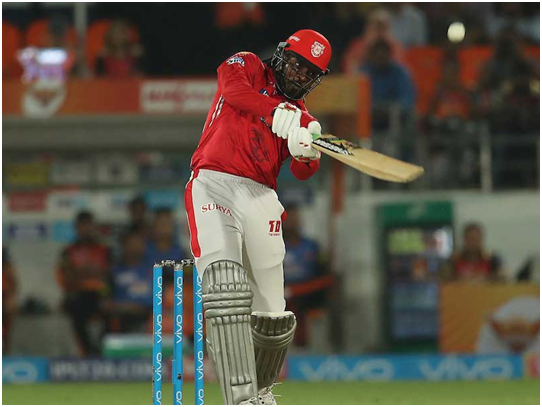 Chris Gayle is a crowd favorite in the IPL. He’s got a sizeable fan following of his own in India and is the most adored out of all the foreign players in IPL. All this for a good reason too.

Over the years, we have witnessed some of the most brilliant knocks from the cricketer. With 5 IPL centuries and 18 half-centuries to boast of in his IPL career, Chris Gayle has given us moments that will remain memorable forever. Check out some of Chris Gayle’s best IPL Moments so far;

In IPL 2013, Chris Gayle went all guns blazing against the hapless bowling attack of Pune Warriors. He broke numerous record that day with his redefining knock of 175* off 66 balls with 13 fours & 17 colossal sixes. He not only registered the fastest century off just 30 balls in IPL but it is also the fastest recorded ton in all of professional cricket.

He may be an absolute beast on-field with the bat but Chris Gayle knows how to have fun too. He’s fun, cheeky and is BFFs with Indian Captain Virat Kohli. No wonder then the fans treat him as one of our own. One such instance during IPL 2015 saw Chris Gayle along with teammates Virat Kohli and Mandeep Singh showing off some mean Bhangra moves in the dressing room.

Reaching the finals in 2016 saw the three players once again celebrating by shaking a leg on Punjabi songs.

The saying ‘Catches win you matches’ was never proven more true when in a match against the Kings XI Punjab, Chris Gayle was dropped twice. And what a fatal mistake that proved to be when he went on to smash 117 runs in just 57 balls. The most entertaining part was watching him slaughter one of the deadliest fast bowlers, Mitchell Johnson with ease.

In this crunch match against the Chennai Super Kings in 2018, Chris Gayle was quick to walk off the field even after the umpire turned down CSK’s appeal when the ball brushed his gloves slightly and he was caught behind the stumps. In the ongoing IPL 2019 season, Gayle has already reached the landmark of becoming the fastest player to score 4000 runs. We cannot wait for what more is in store!