Well-known Casting Director Sonu Singh Rajput, who was born and brought up in Gopalgunj Bihar, educated in Delhi, was carving his future in the banking sector in New Delhi, however, destiny had different plans for him.

Sonu landed in Mumbai, the city of dream, to help a friend but his life changed. Sonu started carving his career in Bollywood. After many ups and downs, Sonu is now the main casting director of Optimystix Entertainment Pvt Ltd. As an assistant, he has worked on shows like Ishq Subhan Allah, Guddan Tumse Na Ho Payega and many more.

In conversation with IWMBuzz.com, he spoke about his journey in the industry.

My journey has been amazing. It has been a roller coaster ride, I have seen a lot of ups and downs. I am a person who believes in hard work and self-ability. I believe success comes to those who never give up.

What challenges did you face during your journey?

I came here to help my friend, before this I was working as a Bank Manager in Delhi but I think destiny had different plans for me. My plan was to return to my job but I was not getting good pay so a friend suggested joining the industry as a casting director. I had no connection in the industry so I joined as an intern but with my hard work and by God’s grace within two years I became casting head. I think everyone faces challenges, it’s how you deal with them makes you a strong person. I have worked in a lot of shows but the turning point of my career was when I did Pooja films & Entertainment Vashu Bhagnani’s Movie-Khamoshi and Colosceum Media Pvt Ltd ‘Hum Saaf Saaf Hain’ for Colors Rishtey.

My biggest support from this industry were Vishal Gupta, the casting director of Four Lion, Sufrat Khan Saif, Executive producer, Pooja Films Vashu Bhagnani and Danish Akhtar. I also want to mention my parents and friends.

Which show had the best casting?

What would you like to say for today’s generation of actors?

For today’s generation, I just want to say acting skills is the key that leads you to success and also I want to tell them don’t have the fear of failure and rejection, keep working on your skills and be confident, do your best and one day you will achieve what you have desired for.

What is your future goal?

I wish to be an independent producer and casting director.

Also Read: Instead of me being recognized for my work, I feel the work I do should be really worthy of recognition: Kavish Sinha, Casting Director Paris and Switzerland are my dream date destinations: Monika Khanna I am in love with my new avatar: Kanika Mann on her new look in Guddan Tumse Na Ho Payega 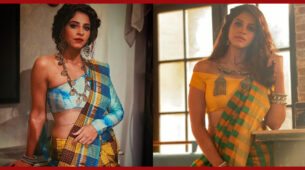