Similarities between Alia Bhatt and Shehnaaz Gill will leave you stunned! Though BB13 has come to an end, fans still can’t keep calm. Shehnaaz Gill’s fans posted a collage of her along with actress Alia Bhatt, where these two divas are seen posing identically same. While they termed Alia, Bollywood ki queen, they called Shehnaaz as Entertainment ki queen.

While Shehnaaz was seen at the finale of the reality show entertaining the audience, Alia too was at the Filmfare Awards 2020 looking her best in Guwahati, Assam.

Alia and Shehnaaz are both actresses. Alia did numerous shows and recently got an award for her role in Gully Boy. Shehnaaz was also favorite of the Bigg Boss as she was in talks due to her closeness with Sidharth Shukla.

Shehnaaz is also a talented singer and manages that with acting. She sang Alone, Veham and Range. Also our favorite Bollywood actress, Alia Bhatt is a singer and sung numerous songs like Samjhawan, Ikk Kudi, and Humsafar.

Recently, fans of Shehnaaz Gill shared this collage of Alia and Shehnaaz on one of the social media fan pages. It was captioned as, “Same pose hai Bollywood ki queen and entertainment ki queen ki same pose,” followed by emojis. 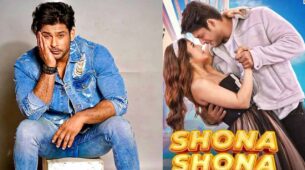