In the past years the Hollywood industry has gifted us with some of its best celebs we have ever known. These celebs are loved not only due to their work but also their looks. We too know two such stars and cannot seem to choose between them and here is where we need your help. 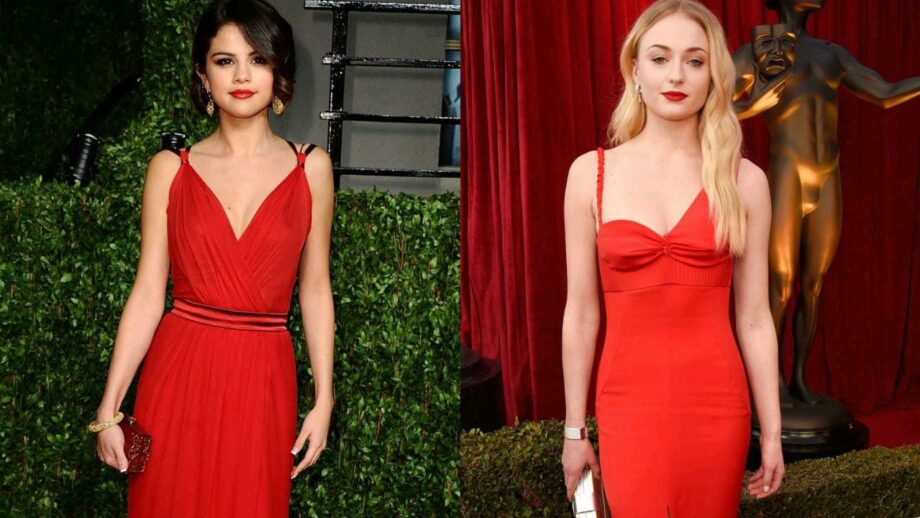 Sophie Turner is without any doubt one of Hollywood’s most loved telly actresses the star was seen on the show Game of Thrones. She played the role of Sansa Stark ok the show. She was loved ever since she first appeared on screen and now has a fan base of millions all over the world. However she is also loved for her chic sense of style where we see her mostly going for monochrome outfits. The star once wore red and gave us the most fiery look while keeping it classy.

On the other hand we have none other than Selena Gomez who is the most loved singer in the pop music world. The star is loved for her acting skills on Disney’s Wizards Of Waverly Place and then for her music in the pop music world with great hits like Bad Liar, Come And Get It and Lose You To Love Me. The star has massive fan following globally who also love her for her edgy sense of style where we see her experimenting with new patterns of outfits. However one of our favourites is her look in red who just complimented her wonderfully.

We think both the stars are equally great and deserving of the title but cannot seem to choose one between them. Hence we’re asking you to let us know below who you think should win this battle.

Selena Gomez's candid pictures will certainly cheer you up