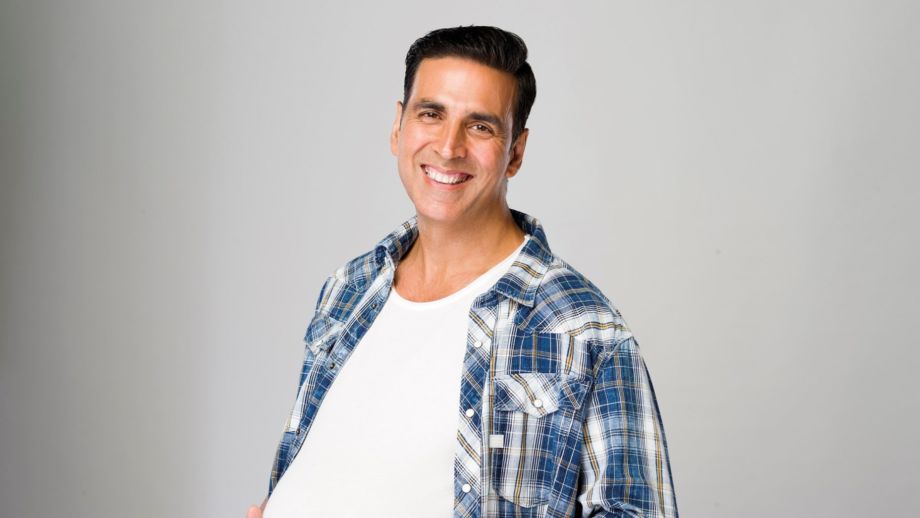 The Khiladi of Bollywood, Akshay Kumar is known to be experimental with every movie or project he undertakes.  Having delivered a box office hit, his movie had a satirical take on age old traditions of toilets in our nation. with his next venture in television as the super boss of iconic comedy show ‘The Great Indian Laughter Challenge’, Akshay Kumar is set to take the audiences by storm once again with his new avtar in the show.

Taking a bold step ahead, Akshay didn’t shy away or gave second thoughts of being the first ‘Pregnant man’ , proudly  showcasing his baby bum in the interesting promo of his TV show. The fine actor along with his funny bones wife Twinkle Khanna have always been up for discussing and sharing their opinion on unconventional topic which our society shy’s away from.

Talking about his new role and new look, Akshay Kumar says, “I used to follow the show before since I am a huge fan of the comedy. When the makers approached me for the show, I immediately gave a nod, because of my love for the genre and I understand how difficult as a profession/ passion it is to make people laugh. With such an interesting concept and script to launch the announcement of the show, I didn’t shy away to be called the ‘first pregnant man’ of the nation as being an actor and an artist, I always believe in being versatile with all my projects. After 9 years, the show is launching its 5th season and I am all set to deliver the next generation of comedy superstars.”

Known his clutter breaking roles in his movie and getting into the nitty gritty of a character, Akshay Kumar this time around went all out for the shoot of the promo. From acting to having food cravings just like a woman to excited and nervous for delivering a child, Akshay Kumar ensured to get into his pregnant character with much ace. This time around however, we see him having delivered more than a child, rather children – i.e ‘Comedy Ke Naye Superstars’.

The Great Indian Laughter show will launch by end of this month. popular comedians, Zakir Khan, Mallika Dua & Hussain Dalal will be seeing as mentors on the show along with Akshay Kumar as the super boss. “ Can’t wait to launch the show and start the laughter riot in the nation,” signs off Akshay Kumar.